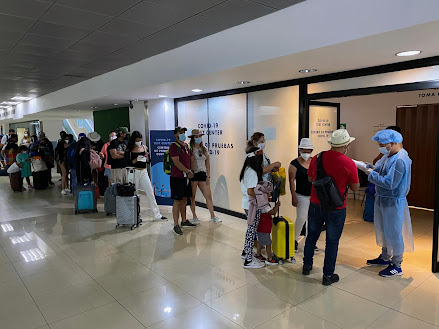 The Covid testing queue before immigration at Aurora International, Guatemala City.
The prevalence of brand new suitcases and the slightly optimistic outfits are very indicative of where we are in this whole process.
Presumably only people coming in from the US are arriving untested in this way. As mentioned in a previous post, the Mexicans (or at least certain airports up there) have rather bizarrely elected to only insist on the presentation of a negative prueba on departure, rather than arrival.
My nasal cavities were developing a bit of a victim complex after my most recent trip.
Meanwhile, cavorting, maskless, septics were very much a thing in Playa last month. Back home this sort of behaviour possibly carries relatively limited personal consequences for their kind, beyond the occasional dead relative.
But a positive test during the course of Spring Break would mean getting stuck, unable to return home and confined to barracks in Mexico with a bottle of tequila and some Twinkies for at least a fortnight.
One wonders if they've even considered the risk.
Posted by Inner Diablog at 6:06 pm