So, as mentioned in the previous post, this one also had all the potential to be little more than a box ticking exercise within a sub-genre — in this case that of the indie family roadtrip, incident packed thanks to young person on the spectrum. 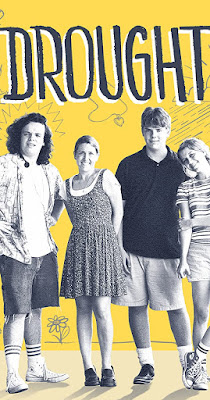 It's set in North Carolina, c1993. Surely someone is crunching the numbers already on this phenomenon — the recent surge in movies set in this crucial, immediately pre-gsm timeslot.

Weather-obsessed teen Carl (played by autistic actor Owen Scheid) is provided with the circumstances that allow him to cajole his caring sister Sam and his more estranged sister Lilian into taking him on a storm chase across a parched southern summer landscape in a borrowed ice-cream van. Also along for the ride is Sam's non-romantic sidekick Lewis (played by Owen's real life brother Drew Scheid). 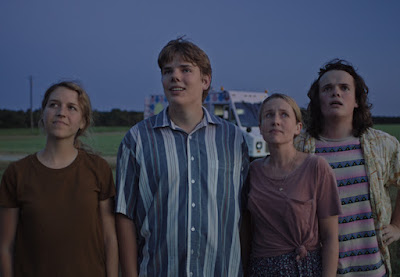 With these sort of personal growth-inducing road trips, it is usually the journey not the destination that matters, yet in Drought much of the charm comes from the immediately, above-averagely agreeable presence of the characters, especially Sam, played by Hannah Black, who co-directed with Megan Petersen, playing sister Lilian.

Black has recounted how the local pair's production had certain innate advantages, such as a cast and crew hired from within North Carolina's pool of kind, hardworking and talented individuals and the fact that much of the area has a conveniently stuck-in-the-past patina. But then on day 12 of the 18 day shoot they were hit by a hurricane, which kind of messed with the location.