I've been wondering whether it is yet time to be worried about so-called vaccine passports or whether this is an anxiety which can be safely parked for the time being.

As Russell here suggests, we do all know how governments and corporations tend to think and behave, but what he doesn't then add is that we are also broadly aware of their historical levels of competence when it comes to the planning and implementation of this sort of thing.

It strikes me that there are at present too many unknowns and in a sense too many vaccines for us to be able to safely plot how this could work on a multilateral scale. Certain states have made expensive bets on specific solutions: the UK on Astra Zeneca (mainly) and Guatemala on S-Putin-ik V. How well these will stand the test of new waves and strains is currently rather moot.

Outside of the Middle East the countries that have taken to vaccination with the greatest enthusiasm are those that had been finding themselves in the deepest hole during this pandemic.

As a result there are countries like South Korea and even Australia that are behind with their vaccination programmes because the urgency has not been there. Are they going to have to force their populations into an inoculation programme largely geared towards travel and entertainment?

And will the UK be able to resist accepting visitors from these countries indefinitely, or at least denying them access to pubs and concerts once they get there?

In practice any kind of restriction is also going to restrict the economic viability of sectors the government seems extremely keen to re-boot right now. Airlines in Britain are already griping about PCR testing.

The very idea of a vaccine passport is also a kind of libertarian category error — the notion that the jab is an individual burden. Instead, it strikes me that vaccines primarily function at the collective level. So, if enough people in say Manchester are vaccinated this year, covid may recede sufficiently from that region that it really doesn't matter if an unvaccinated person enters a pub. Manchester becomes Madagascar.

A final thought: one has to imagine that there are several million people in the UK that have already been infected with covid. If the vaccine passport system is to be applied generally to 'normal life' then most of these people will need to be vaccinated and this simply isn't the best use of resources right now.

In my recent visit to Mexico I made a number of perhaps relevant observations.

— Technological solutions to complex problems seem to tease the native incompetence out of governments and institutions.

— Smaller entities fill the gap and establish their own protocols, with varying degrees of effectiveness and control.

One of the worrying aspects of all this, for me at least, is a partially unnecessary digitalisation of everyday life. My Tigo phone was disconnected from celular data in Quitana Roo. I was on holiday and didn't really care, at first, but soon discovered that there is a growing presumption up there that everyone possesses a fully-charged, always on, always connected device and those that don't are behaving in a manner some way between awkward and suspicious.

Meanwhile I was becoming seriously fed up with QR codes, which I had imagined were heading in the same direction as 3D TVs. I am still relatively optimistic that vaccine passports remain on that pathway.

In the case of the UK at least, a nation that appears incapable of insisting that everyone wears a mask, seemingly now wishes to insist that everyone gets a jab and then an app. 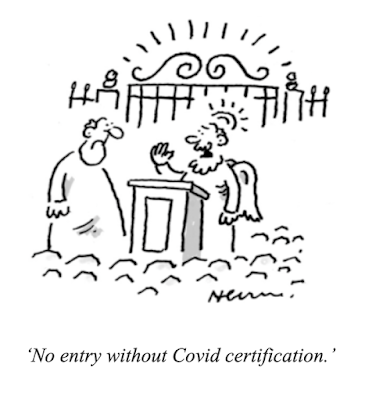 Posted by Inner Diablog at 1:11 am