I have no idea what relation the title here bears to the plot, which is a strange Frankenstein's monster made up of familiar Hollywood B-movie thriller parts.

We have all seen this movie before in one of its previous lives.

For many critics this familiarity is an obvious defect, and yet one can only wonder it it is actually attempting to entertain us in a slightly contrarian fashion, by riffing on its far more memorable antecedents.

The predictability here is taken to the absolute max. There's a 'twist' that is loudly fog-horned in the first act, a book placed on order, a pair of skates... 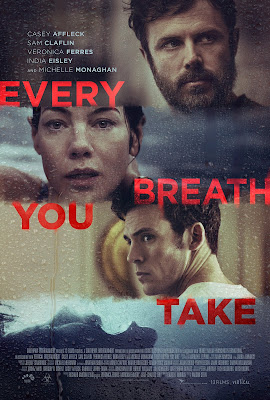 Is this deliberate? At the same time the screenwriter and/or director seem to be attempting to vaguely blur the outline the by leading us along a path that at times seems anything but straight.

And it plods. And so too does Casey Affleck in the lead role as Phillip the unorthodox shrink, as if in sympathy with the at times close to somnolent narrative around him.

Sam Clafin appears to up for his role as the charming British psycho, but is ultimately a bit wasted. One starts to lose patience with his character, as written. That all the women in Phillip's life immediately swoon over him, essentially because of his accent (which is ultimately a bit of a plot hole) and the fact that he has a novel in the pipeline, feels vaguely demeaning, if not a actually misogynistic.

It is amusing that the characters talk of heading up to British Colombia when it is blatantly obvious that they are already there.

Posted by Inner Diablog at 8:39 pm