There's already a numerical notation in the title as I just know I am going to have SO much to say about this book, which was Patrick Leigh Fermor's first published travelogue.

Arriving by boat on a tropical French territory in 1948, the author comments that his impressions of the Central American mainland, Guatemala included, will have to wait for a subsequent volume — yet sadly it seems that this would turn out to be one of those sequels that never really got off the ground.

Still, the impressions of our finest travel writer of the last century as he hopped from island to island in the Caribbean during the immediately post-war, post-imperial era, accompanied by his future partner and later wife, the Honourable Joan Elizabeth Rayner, plus Costa, a Greek mate who acted as his Catherwood, make for extraordinary reading today. 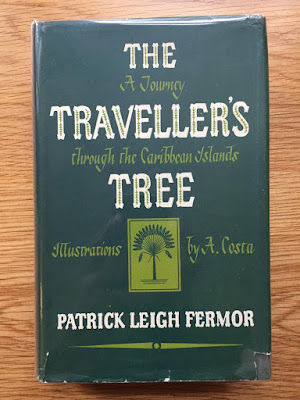 The first thing they did off the boat was head to the market to the fruit: a soursop (anona), a paw paw (papaya) plus an avocado.

I was immediately reminded how my parents used to refer to avos, which tended to arrive on their table in halved, semi-mature form, dolloped in vinaigrette.

We each chose an avocado pear: dark green or violet globes the size of cricket balls, enclosed in a hard and warty carapace. The knives made a sharp tearing noise as we opened them. In the centre, loose in their hollows, lay big round stones, completely spherical and smooth and very heavy. I hated throwing them away, they seemed so perfect and neat, and somehow important, but except as embryonic avocado trees, they are useless … The pale green fruit clung to the shell with a consistency half-way between butter and plasticine.

The plasticine reference simply emphasises the connection to 70s sensibilities.

This rather quaint unfamiliarity might seem something of the distant past, yet when V was studying in England in the early 90s one of her college friends, Aitor, a Basque from Vitoria-Gasteiz, confessed to her that he had never come across an avocado before landing in London. (In fact, he’d never even heard of them...)

Leigh Fermor's description of papaya trees made me chuckle out loud...

The fruit of the paw-paw clustered round the perpendicular trunks as thickly and symmetrically as the breasts of Diana of the Ephesians.

I've travelled with his like, excited, engaged public schoolboys whose worldview was formed and to some extend fixed, during the formal and undoubtedly durable process of 'classical eduction'.

Leigh Fermor was a lifelong Hellenist. The opening sequence of the last instalment (so far...) of Richard Linklater's Before... series was shot at his house, at his table, at Kardamyli in the Southern Peloponnese, just before he returned to the UK to die in June 2011.

Before Midnight was released in 2013. I saw it in segments, during my lunchbreaks, by way of buying three separate tickets to the Odeon in Shaftesbury Avenue.

Posted by Inner Diablog at 8:45 pm