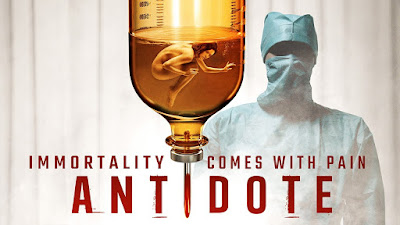 It's practically a given these days that any chiller-thriller released will feature a disappointing last act which will cost it at least a star in the final rating. This is no exception, but for the first three quarters at least it is fully deserving of more than its <5 score on IMDB.

The premise is however very guessable, which makes the moment late on when one character congratulates another for figuring it out all that more irksome. Still, as representations of bad nightmares that show no inclination to end, Antidote exceeds mediocrity by some distance.

It definitely fed into a nightmare I had that same night in which I was wandering around a vast hotel entering a series of rooms only to discover the same bizarre couple within each of them.

Posted by Inner Diablog at 9:55 pm