Lord of the Flies Lite, in space...with added girls. 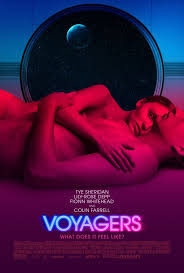 That would have been the elevator pitch I suppose. In a way it is also a less chin-scratchy version of High Life from Claire Denis, and on that level at least, contrastingly more entertaining.

Both films utterly fail to convince the viewer that the action is actually taking place in deep space or provide any clues to the internal layout of their respective vessels.

Here we get a lot of 70s Doctor Who-style running around in rather bland spaceship corridors. It's not just the setting (and production design) that are a bit flimsy, but the entire premise comes pre-perforated.

And yet, as I said, it is kind of fun, not least as an introduction to a subset of the young stars of tomorrow, including the daughter of Vanessa Paradis, Lily-Rose Depp, plus there is fine turn from Fionn Whitehead as bad apple-in-chief.

It's been compared to a GAP advert (there are more prime colours in the poster than ever we see on board), but overall this is no advertisement for genetic engineering.

Posted by Inner Diablog at 5:10 pm