I've been posting to this blog — under the present heading Inner Diablog — since December 2003.

The views each post tends to get have been fairly consistent. And I have a small coterie of subscribers, under twenty in number.

This page was never intended as a social platform. The clue is in the name, a portmanteau of Blog and Inner Dialogue. The slightly solipsistic nature of the enterprise was baked in from the outset.

Back in 2003 I was looking for a digital mechanism for the achievement of certain personal goals.

1) A place where I could digest my significant cultural experiences — largely books and movies, then and now. Some, but not a great deal, of political observation would be included.

2) A place where I could grapple with the discipline of writing for this particular medium, a kind of private journal with the implied jeopardy of public visibility.

3) A place to develop a voice. Not necessarily my actual voice in everyday non-virtual social interactions, but one that would take shape as the fairly consistent personality and disposition of this page.

I've kept a fairly detailed daily diary going back almost thirty years, becoming ever more disciplined about this over the past twenty, combining raw facts with commentary, testimony with analysis.

But at the start of the noughties the idea of additionally penning a blog as a sort of spin-off exercise occurred to me just at the moment that I was undoubtedly coming under under the influence of Jean Baudrillard's fragmentary writing, exemplified by the Fragments and Cool Memories series published by Verso. 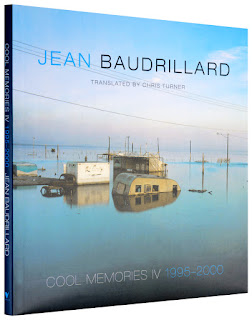 I am uncertain now how much of that influence has held through almost two decades of constant blather.

Social media has undoubtedly altered some of the basic parameters. And travel, which I have done to a greater extent since starting the blog than prior to that. These days I digest my inner and outer experiences differently, more visually than I used to, for sure.

Meanwhile, I am (very) slowly working my way through the un-abridged ten-year diary of Samuel Pepys, who attended both the same school and university as I did, and who wrote — in shorthand and with coded passages in mock French and Spanish — the most famous diary ever hidden in someone's bedroom, which was at once absolutely private and yet from its current physical location in the library of Magdalene College, very much part of England's historical public record — something I believe its author reconciled himself to in the end.

Claire Tomalin's biography of Sam describes him in the title as the 'unequalled self'. Pepys was certainly gazing inwardly in a way that was disconcertingly frank and modern in 1660s London, yet he too must have been aware of the truth written down in another rather controversial personal journal, that of more recent Chilean author José Donoso...

Behind the face of the mask there is never a face. There is always another mask. The masks are you, and the mask below the mask is also you . . . All different masks serve a purpose, you use them because they help you to live . . . You have to defend yourself.

Some nitwit troll once opined online that I 'hide behind my words'. He or she demonstrated (only) subconscious understanding of what this little project is all about.

For some reason a recent post here appeared to go semi-viral. Many thousands of readers. I cannot really figure out why. It was a movie review without any particularly strong or controversial opinions. Nor indeed was it a notably high profile release. A freak occurrence perhaps.

Posted by Inner Diablog at 6:44 pm