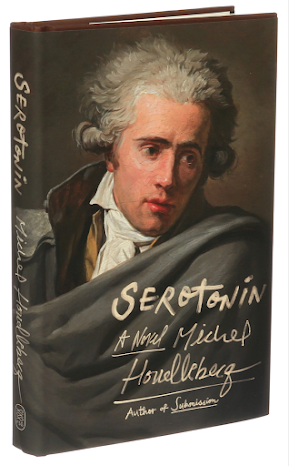 During my fresher year at Girton I was approached one evening in the Stanley Library by a super-sophisticated and sybaritic young lady of Hispanic origin, mature and materially well-appointed way beyond the level of just about everyone else in the intake, and frankly, a little terrifying.

She spotted the book in my hand and duly cautioned me about pursuing my study of Schopenhauer. It tends to lead to suicide, she noted with a knowing smile.

Back then and ever since, I've read Schopenhauer for laughs.

Kierkegaard observed that "the more one suffers, the more, I believe, has one a sense for the comic" and there is really no reason for this not to also apply to the suffering deriving from morbid self-pity.

There's a moment when Florent-Claude — the narrator in Serotonin — shortly after doing what many fans of classic British comedy would recognise as a 'Reggie Perrin', turns up at a doctor's surgery and explains his new situation:

When I had finished summing up my recent life to him, he agreed, in fact, that I genuinely needed a course of treatment, and asked me if I had had thoughts of suicide. No, I replied, death doesn’t interest me.

We Brits seem to find embittered middle-aged men more entertaining than most: Basil Fawlty, Victor Meldrew, Alan Partridge, Alf Garnett, Mr Bean and so on. I guess this is why I find Rod Liddle's column in The Spectator such a guilty pleasure.

I suppose that if Liddle were to take to the fictional form and become our most famous living novelist on the international stage, he'd be a near enough equivalent of Michel Houellebecq, minus all the stuff about gang bangs and blow jobs, one presumes.

So here we are in the doldrums of 2020/21, and one keeps coming across recommendations for 'feel good' books to put the wind back in our sails. Yet there remains much to be said for the — perhaps counter-intuitively — uplifting effect of the sort of rancid, misanthropic rant that habitually forms the backbone of this particularly cantankerous Frenchman's novels.

One might say that Houellebecq is a conservative with a capital D for doomed. Rather than hankering after the past (which for him means the 70s, and is thus horrid), he seems to live in an imagined near future that turns out to be disconcertingly prescient as he moves from novel to novel, each a kind of update on the ones that came before and each also more of a routine than a fictional narrative per se.

One always finds oneself having to wade through clumps of mean-spirited and banal generalisations (often about women), before one comes across one of those surprisingly lucid and occasionally even soulful observations Houellebecq can suddenly serve up.

When first published even the French author's detractors admitted grudgingly that in Serotonin he might have yet again demonstrated a form of foreknowledge, as the later, Normandy-based section of the novel is said to have anticipated France's gilets jaunes movement of 2018.

Earlier on he seems to be anti-EU and anti-anglais at the same time, with his spikiest barbs landing on the Dutch...

You’re never well received by the English – they are almost as racist as the Japanese, like a lite version of them), but also from the Dutch, who obviously didn’t reject me out of xenophobia (how could a Dutch person be xenophobic? That’s an oxymoron: right there: Holland isn’t a country, it’s a business at best).

Right now in 2021 the uncanny contemporary relevance of this book seems to be further suggested by its title, for this is a secretion that is vital to our sense of well-being, yet also linked to the self-esteem we derive from our group interactions.

What then happens when we deny ourselves these activities, or are denied them by our government?

Anyway, I am some way from the end of the novel and so will probably discover some reasons to return here with additional reflections on it later on...