There's way too much sub-plot and sub-character in this story for a genre movie.

The adaptors of the book by Shari Springer Berman (possibly including the novelist herself) had to be more ruthless — and then the producers needed to understand that the problem could not be solved just by hiring more familiar actors and extending the running time. It's a classic Netflix error really. 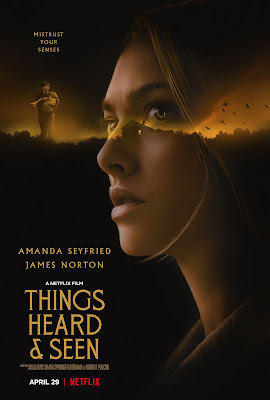 This movie wants to be more than just a run-of-the-mill genre flick, but it just doesn't have the space to explore some of the metaphysical and artistic themes that are tossed in, nor do we ever really learn the relevance of one character's eating disorder etc.

I have a more general issue with the use of coincidence in fictional narratives. It works well enough for example in works like Thomas Hardy's Tess of the D'Urbervilles (the note under the door), but less well in supposedly taut thrillers.

Here we are led into the last act by a close-linked sequence of three major coincidences: the first at a museum, followed by another at a dock and then a final example in a car park.

The phenomenon of the supernatural horror flick that builds slowly, with considerable promise, only to nose-dive into disappointing nonsense in the last act is familiar and unfortunately this is a textbook case.

Posted by Inner Diablog at 8:21 pm