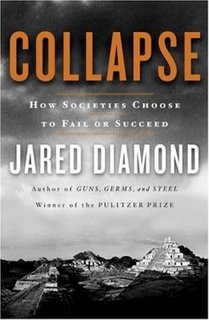 "What were Easter Islanders saying as they cut down the last tree on their island?," muses Jared Diamond as he seeks an explanation for why "any person or any group in any society would knowingly do something harmful to the society as a whole."

In an early chapter on corporate responsibility for environmental "clean-ups" in Montana, his conclusions are quite refreshing: "We the public bear the ultimate responsibility. Only when the public pressures its politicians into passing laws demanding different behavior from mining companies will companies behave differently: otherwise, the companies would be operating as charities and would be violating their responsibility to their shareholders."

I know I will again enjoy all the well-constructed arguments, but as with Guns, Germs and Steel there will be some nagging caveats. If that book was about relative success, he turns here to the causes of absolute failure, pinpointing 5 key factors in the sort of collapses that permanently compromise a given society's political and cultural complexity.

For the first time, he argues, we now face these challenges on a global level − something which threatens to both lower Western living standards as it undermines our values. In this context modern technology (of the Information sort in particular) provides grounds for both optimism and pessimism: "For the first time in history, we face the prospect of a global decline. But we are also the first to enjoy to enjoy the opportunity of learning quickly from developments in societies anywhere else in the world today, and from what has unfolded in societies at any time in the past. That's why I wrote this book."

Diamond argues convincingly that a reliable, scientific understanding of the problem requires both good individual studies and good comparisons. "Only from the weight of evidence provided by a comparative study of many societies with different outcomes can one hope to reach convincing conclusions."

Yet you sense that he believes that collective decision-making is essentially a straightforward aggregation of individual decision-making, and that in general, human activity is just the wick on a composite candle made up of other "factors". Accordingly, a geographer might have predicted the slaughter in Rwanda: "Population growth, environmental damage and climate change provided the dynamite for which ethnic violence was the fuse." (Though in Guns, Germs and Steel it was perhaps geometry not geography that gave Eurasia the edge against America and other competitors.)

Back in the days when I studied History, I came across this line of argument frequently enough. Against it stood the concept much favoured by historians of the French school: mentalité − oh, how we loved to use that word in our A-level essays. These days it seems rather non-PC to say so, but I do believe it to be self-evident that cultures tend to sport quite stable personalities. If some are risk-averse, others are reckless...honest/dishonest, explorative/stay-at-home, kind/cruel etc. More controversially perhaps, they can be collectively clever or dumb − the individual IQs within the society mattering less than the speed and depth of the connections between them.

Indeed, in general these cultural personae not simply an aggregation of the personalities of their current constituent members, as they are constantly contributing to the formation of the individual personalities within them. In other words, you cannot fully assess collective decision-making without some sort of understanding of local loops of cultural dynamics.

But it's early days yet; I am still drifting through Modern Montana, on page 37 of 525. Much of this criticism is in a sense anticipated, based on my reading of Diamond's earlier work. I shall post an update later in the summer...if the World Cup doesn't wreak havoc with my planned reading projects!
Posted by Inner Diablog at 5:32 am