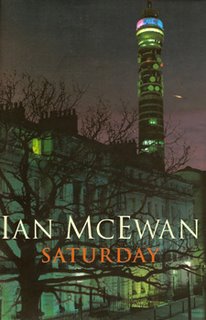 By general consent McEwan is currently the best British novelist we have, and this very-enjoyable book nevertheless encapsulates why I tend to feel a sense of lurking dismay at this state of affairs. In style and sensibility McEwan has all the necessary traits of a great man of letters, yet when it comes to plot and character, he seems to have the skills of a lower-tier Hollywood scriptwriter. What gives?

The only fully-realised character in Saturday is the narrator, a neurosugeon called Henry Perowne, whose experiences over 24 hours are the basis of the story. McEwan describes in almost too much detail the ordinary sequences of Perowne's life − surgery, squash, shopping, cooking − and some extraordinary goings-on that escalate out of an early-morning confrontation in University Street. (Where by pure coincidence I found myself on the evening I was finishing off the book.)

This particular Saturday is also the day in 2003 that mass demonstrations clogged the streets of London in protest at the forthcoming invasion of Iraq, so Perowne's own domestic politics and upper-middle-class anxieties are loosely tied to the bigger picture of the post 9-11 situation in the West. McEwan successfully realises Perowne's inner monologue, but while there are many interesting private reflections floating around in there, the novel as a whole is not particularly insightful.

Perhaps I'd have felt better at the end if McEwan had provided a clearer indication of what he really thinks about Perowne and his family. There are a few sardonic spikes, but I also detected some aspirational yearning. It was the same with Atonement - the social satire scrapes around the edges of an English idyll.
Posted by Inner Diablog at 11:31 am