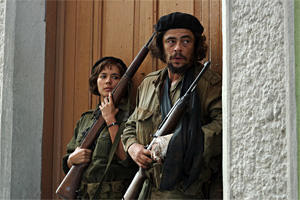 Gripping, but we were glad we didn't have to sit through Part 2 straight away after a 15 minute interval like those audiences in Cannes last year.

During the Cuban campaign sequences one gets the impression of Che that an embedded journalist might have picked up. Slighty distant, devoid of any really private moments. (The score too is used sparingly.)

Instead of the full prose of Guevara's own words from the Reminiscences, we get close-up snippets of 60s interviews which he handled like an actor at a press junket.

It's as if Soderbergh wanted to avoid the kind of explicit hagiography that Walter Salles indulged in with The Motorcycle Diaries, and deliver a more factual, eye-witness portrait, and yet what we end up with is an even more idealised agent of revolutionary action.

And, perhaps even more strangely, Che himself is the least interesting thing on screen. The movie is a collection of understated but powerful landscape vignettes and engaging snippets of Cuban banter.

Again it's as if script-writer Peter Buchman was striving to avoid a melo-dramatised account of partisan leadership (of the kind we saw just recently in Defiance) and so chose to lay down a trail of witnessed incidents, leaving his audience to gather them in sequence and to thereby intuit the undisclosed dramatic structure beneath the chronological, journalistic thrust of the story.

It was a little disorientating at first, but ultimately enthralling. Even V, who doesn't care for either war films or westerns, was giving it her full attention.

What a pity that what Soderbergh now calls the Che 'trilogy" (including Walter Salles's first installment) lacks any coverage of Che's moment of transformation in Guatemala, which would have provided a bridge between the idealistic young doctor and the mature revolutionary we see here.

[It's a shame the IMDB page on this movie has no entry for filming locations. The final battle scene in Santa Clara stoked my curiosity in this respect.]
Posted by Inner Diablog at 3:40 pm