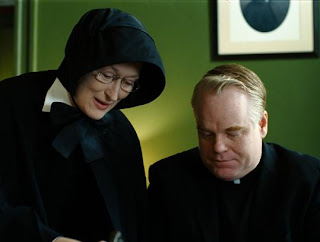 The Broadway version was called Doubt: A Parable, and it is indeed a parable, a metaphor even — and perhaps a rather simplistic one — that underpins the narrative of this movie.

In this battle of wills between priest and nun in a 60s Catholic grade school in the Bronx, the issues at stake are not essentially spiritual.

Streep's Sister Aloysius is a widow for whom the vows she has taken imply a strict system of self-denial which extends to the creepingly modern world of the young people in her charge . Her attitude to Frosty the Snowman for instance is decidedly Talebanic.

Father Flynn could be both a hypocrite and a pederast, or he may just be the kind of priest whose celibacy is tinged with license, a man prepared to give a bit more reign to his feelings and desires.

Perhaps in order to compensate for some of the inherently simplistic, sermon-like treatments of issues such as tolerance and compassion, John Patrick Shanley lays the moral ambiguity on pretty thickly, especially in the scene when Sister Aloysius goes for a walk around the block with Mrs Miller, mother of the black altar boy the nun suspects of having benefited from inappropriate levels of protection from Father Flynn.

Both central performances are deserving of their Oscar nominations. There are odd spikes within each however which will tend to affect how viewer's respond to this parable. Streep's Aloysius is sometimes a bottled-up charicature, at others disconcertingly knowing. And when first confronted with the Principal's suspicions Hoffman's Flynn appears to betray his guilt with some cartoonish 'who me?' expressions before reverting to a more enigmatic defence.