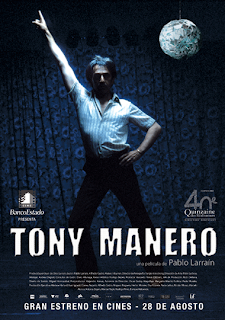 Raúl Peralta is an undusted-looking individual who will let nothing get in his way of being recognised as Chile's version of Tony Manero, the character played by John Travolta in Saturday Night Fever.

In as much as his route to the televised dance-off involves a series of brutal murders, one might be tempted to describe this protagonist as a serial-killer, but each of these incidents is really a means to an end and we never see Raul killing from compulsion alone. His ruthlessness also plays out against the backdrop of Pinochet's Chile, where Raul is but a small fish in a bigger pond of violent psychosis.

Although the concept here is essentially mainstream and approachable (and one can easily imagine how Hollywood would go about a remake) Pablo Larrain's treatment of it is really neither of these things. Indeed, almost everything about his film is extraordinary, not least the performance of Alfredo Castro in the lead. (He also co-wrote the screenplay.)