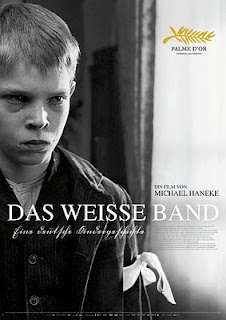 I can see why some critics have described Haneke's Palm D'Or winner as a film one you can greatly admire if not exactly love.

And yet It is so unquestionably superior to anything the Academy could possibly nominate for Best Film (and that with the category expanded to 10) that it rather makes the whole Oscars a bit of an irrelevance this year...unless of course Das Weisse Band makes it in there.

It is narrated from a presumably post-fascist future by an old man who was once the school teacher in a patriachal German village on the eve of the Great War.

Unpleasant things start occurring, first to the Doctor and then to the Baron's son and cabbage patch. A barn burns, a mentally handicapped boy is kidnapped and tortured. The teacher ultimately suspects a group of the village children seemingly led by the Pastor's eldest son and daughter, but as in the extradordinary Caché — widely considered the best film of the noughties — Haneke stops short of a full reveal. One finds oneself not so much tracking the surface narrative as constantly gazing inward at its disquieting deeper implications, while the stunning cinematography is ever suggestive of a chain of discreet black and white masterpieces.

Posted by Inner Diablog at 3:14 pm