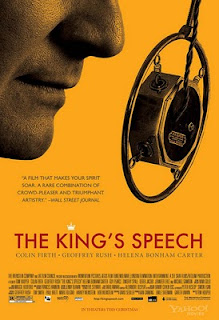 A certain Tristram wrote into Kermayo this week to recount how the end of this film was greeted with a few moments of silence, after which a well spoken gentlemen was heard to exclaim "Oh very good".

Yes, all so oh very good for what it is, but I was left with reservations stemming from a nagging sense of what it hadn't been. Suppose Shakespeare had decided to tell the tale of Richard III from the perspective of his relationship with the physio treating him for the hump...a notion at least indirectly suggested in this script. It might have been a more moving tale, but shunting all that history, that really quite important history, into the background undoubtedly affords an opportunity for more subtle subterfuge than the Bard himself was prone to when handling recent political personages. (Yes, I know Richard III probably didn't have a hump...)

Screenwriter David Seidler reports that the Queen Mum refused him permission to dramatise the story of her husband's stammer in her lifetime. We've had no end of TV treatments of the abdication scandal, but this more personal perspective was long deemed inapposite by the remaining Windsors.

If one would also like to appreciate how distracting it might be from disturbing historical truths, Christopher Hitchens made the case for falsification in yesterday's Guardian.

That is a great Hitchens article! I hate that he is so sick, for I will surely miss his excellent writing and iconoclasm when he is gone. Can't say I agree with him in all things, but mostly I do and love how he skewers illusions such as nationalistic myths and heroes, and tired patriotic lore.