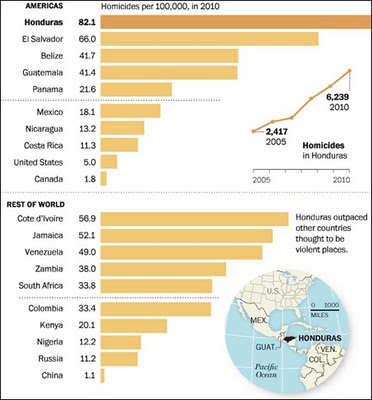 This year Guatemala had, with the exception of Mexico, a lower relative homicide rate than all its neighbours. Yes, that includes Belize. Honduras, meanwhile, is practically off the scale.
Yet when it comes to media stories about the wave of 'drug-related' violence that threatens to overwhelm civil society south of the border, Mexico and Guatemala are invariably the usual suspects. I don't seem to recall reading any articles in the past 12 months describing the ecotourism destination next door as "ungovernable", with the implication that it is rapidly degenerating into some sort of failed state".
It is also interesting to note that Colombia, which has done a sterling job of PRing its recovery from the maelstrom of lethal violence that swept across it in the 80s (and markets itself to foreigners with the strapline "The only danger is that you want to stay"), is still essentially as dangerous as South Africa.
Posted by Inner Diablog at 10:18 pm

Sir, could you provide a link for the interesting graphic?
jthomasbennett@gmail.com

eToro is the #1 forex broker for newbie and pro traders.