Ali Baba and the 40 Thieves 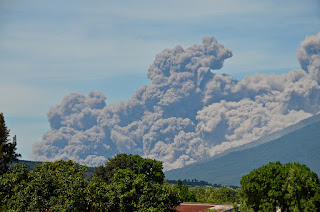 Yesterday turned out to be a day that the bad guys of Antigua will want to forget  – our alcalde and various business associates were arrested for setting up a mutually beneficial system of public works contracts. As for the nice folk over at the La Reunion resort, well, this happened to them.

Still, the chaos and panic created by the morning's eruption has been exaggerated by the outside world's media. Fox reported "mass evacuations" and the BBC originally went with 30,000 people displaced, before reluctantly reducing the number this morning to 11,000 (and blaming their source for the earlier inflation).

In the Prensa Libre today the lead story was the downfall of Adolfo Vivar not the volcanic eruption, which was given as much space as the launch of the new iPhone, news which had frankly already been left out in the sun for a while. 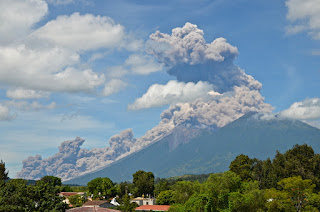 This moment, which occurred around 10:15am yesterday was indeed very photogenic, but lasted not more than about 30 minutes. There were further substantial eruptions later in the day, but nothing of quite the same magnitude and things have calmed down considerably today. The authorities expect Fuego to fully 'stabilise' in the next 24 hours. 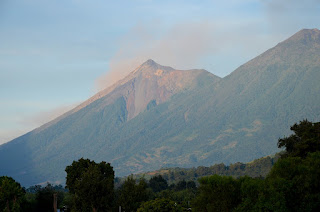 Meanwhile it is not especially clear who is now in charge of Antigua, or at least will be for the foreseeable future, now that we are apparently likely to be mayor-less. (It is somewhat improbable that Guatemala follows the IOC in awarding the cheater's vacant position to the second placed competitor, and we won't be holding our breath for a GB-style bi-election.)

Yesterday we tried to pay our water bill, but con permisito was not enough to get us past the new set of security guards outside the Muni. 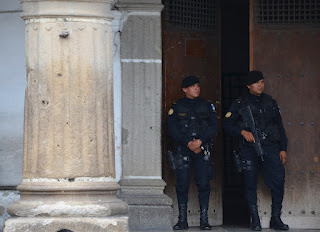 All round, a day of almost unprecedented excitement here in Antigua, the stand-out adrenalin rush coming in the late afternoon when I installed the new Seagate 750GB 7200rpm/SSD hybrid drive in my Macbook Pro!

Given the direction the ash was blowing, I was surprised about the 33,000 evacuations, but figured that Yepocapa must be bigger than I realized, and have a lot of kids.

It's a sad state of affairs when the men feel the need to stay behind in an evacuation to guard their belongings. Also, I've got to wonder about the loss of livestock and corn/beans/produce.

CONRED seems to be doing a good job of disaster mitigation and response. I hope they also have funds for recovery.

As far as the alcalde is concerned, Q2 million seems like a paltry amount, compared to the good old days of "El Pollo" Portillo and his foreign bank accounts. CICIG's work gives me hope. Perhaps other alcaldes will take notice.

We know people in Yepocapa and I am almost certain that they were not evacuated.

It has become a matter of concern to me that cultivation has expanded noticeably on the Antigua side of all three local volcanoes since I came to live here. I imagine many of these plots are of questionable legality.

Q28 million is the figure being quoted in the media here. It's clear though that Vivar is being made a spectacle of. When they booted him out of the PP he should have known that his number was up and maybe resigned and done a runner. It was rather dumb for someone with such deep commercial roots in this town to expose himself so badly.