This poor dog was left tied to a tree on the little green outside our house in the early hours of the morning today. 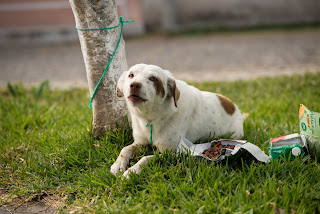 No shade, and until we showed up, no food or water either.

As we were trying to get close with the sustenance a neighbour appeared and angrily queried whether we were the owners. (Do I look like a cold-hearted melonfarmer?)

The poor dog remained there all day. Nobody dared to get too close because he seemed ready to attack no matter how kindly a disposition one assumed.

As of 10pm tonight the poor pooch has been freed, thanks to a very patient and pretty heroic gentleman from Pastores, who'd learned of his predicament on social media. He wanted to take the dog with him, but his overall snarliness was not significantly reduced by being unfettered.

He went for a wander, but has now returned to the tree, seemingly awaiting the return of his utterly heartless dueños. (I think I have managed to capture their faces with our security cameras.)

Posted by Inner Diablog at 4:34 am