Over the past eight years I have accumulated enough material to write quite a juicy piece of fiction about the escalating incidents of encroachment and violent harassment that we have suffered at the hands of an Australian citizen named Jason Wade Lever.

It's really such a long and complicated story that I have fretted over how to share it, as I feel I now must. In narrative form, as protocol dictates, names and details would be altered, but here on this medium I shall be open and factual. And episodic.

Our first encounter with this individual in 2013 began with a description of torture and concluded with a thinly veiled threat (...of poisoning).

Veiled threats led to not-so-veiled threats, and to repeated acts of aggression in the streets of our village, with no care for who might get caught up in them: friends, family, children. Trespass, both digital and physical.

But in particular there has been a pattern of vile, misogynistic and frankly pervy abuse directed against my wife.

And then there is the stuff at which most well-balanced teenagers would turn up their noses: an intense and utterly infantile, six-week cyber-bullying campaign and behaviour like this — giving the finger to our security cameras while he wizzes by on a douche-ati. 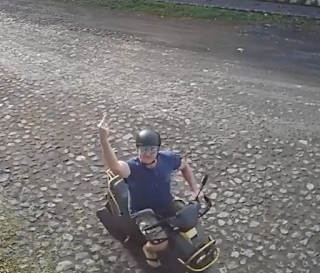 A panza verde professional that came to hear of our plight and who, whilst not personally acquainted with Lever, occasionally mingles amidst the same ex-pat cliques, decided to conduct an investigation into this individual, entirely off his own bat.

When he presented his report to me in his office, it was a tale of alcohol and substance abuse plus mental problems, yet he added that Lever was pretty well liked within his own milieux, considered to be non-violent and widely believed to have put many of his past problems behind him by marrying a nice local girl.

That, however, is not the story I am going to tell.

But to begin with, like all good tales, it has a bit of a backstory...

Longer-termers around here will no doubt recall this rather sordid character, Jeffrey L. Cassman, who went by the name of Mark Francis whilst on the lam here in Antigua. 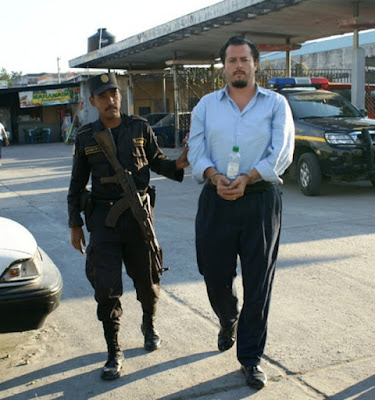 At the time this snap was taken at a gasolinera in Ciudad Vieja in 2010, Cassman had been wanted by the FBI for a couple of years, as he'd made a career of swindling a bunch of people back in his native Tennessee and nearby states.

It was a punter from Arkansas who eventually rang the bell on one of the 'fool proof' investment schemes touted by Cassman Financial, forcing the eponymous 'advisor' to flee south over the Tropic of Cancer with his spouse and then nine children. (Oh, and in excess of $350,000 that didn't really belong to him).

Ensconced in Antigua as 'Don Marco' he was soon up to his old tricks, not exactly full ponzi, but a friend of mine once shared with me a prospectus for a 'fool proof' tuctuc fleet start-up that JC had circulated, which insisted it would pay double digit returns from the first year onwards.

Eventually some of his ill-gotten gains from both here and stateside went into a local operation called El Ocelote SA, the name of which is still proudly displayed right inside the entrance to the business that now meets the world under the umbrella brand El Barrio. (It is also a company whose utility bills I discovered had been registered to my own private address, but more on that nonsense in future episodes.)

I have no reason to conclude that this estafador has ceased to be a sleeping partner of sorts there. He was certainly back in Antigua a couple of years ago, having announced proudly on the interwebs that he needed to check out his various business interests.

Before he was marched off in handcuffs, one Jason Lever, occasional miner, had also reportedly been Cassman's employee. And with Don Marco off to spend a four year sentence in federal lock-up (he pleaded guilty), Lever soon re-styled his image from employee to co-proprietor; the new alpha.

At the time we acquired this property next door to this still-single Western Australian larrikin, I had no notion of any connection between this pair, but its significance cannot now be discounted, because readers might remember how Mark Francis, auteur of GuateLiving, became my wholly uninvited digital snooper and stalker.

His blog is long gone, but not before I harvested it in its entirety. 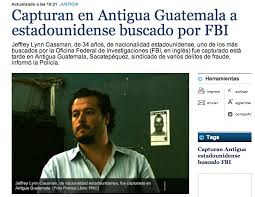 Using his alter-ego, Cassman presented himself as a Latin mass exclusive, Catholic fanatic (years behind bars have not prevented him adding four more offspring to his tally), as a right-wing extremist (and one that has lately segued effortlessly into support for the insurrectionist-in-chief) and as an unrepentant xenophobe.

I generally hesitate to bandy about the R word, but the level of respect he showed to this country and its inhabitants whilst he skulked around here as an unwanted guest was almost certainly deserving of it.

Above all, a hypocrite, for the word on the streets after his arrest was that his extra-marital indiscretions had contributed to his downfall. Yet somehow his wife has stuck by him, even though he scammed her close family as well and had left her in a run down house with their now ten kids when he was carted off back to Nashville.

I never met him and it remains a mystery to me what I could have done to merit those flourishings of attention that began to appear like a morbid infatuation. This is the first time I have in a sense responded personally and proportionately to the drip drip of caustic abuse I had for almost two years.

Yet this experience was but a tiny part of this 'ripping yarn' recounted at some length elsewhere... 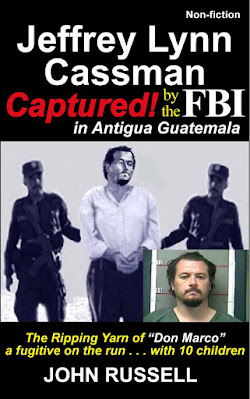 Even if the connection I intuit here is coincidental, the undeniable commonality for me is that men who are pretty much all facade and who derive pleasure from preying on others, also tend to suffer from simmering resentments.

And vendettas often have deeper, more twisted roots than one may at first be able to grasp.