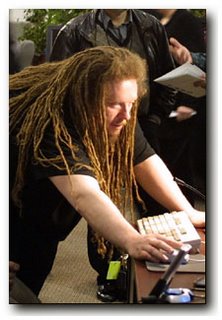 Jaron Lanier's provocative essay in Edge this week (Digital Maoism: the hazards of the new online collectivism) has reinforced some of my present discomforts with the state of online media. In particular I have voiced concerns on this blog about:

- the results of algorithms being presented as "intelligence", blurring the distinction between qual and quant information
- my sense that the Net as a whole is losing some of its flavour, rather like those supermarket chickens

Lanier is worried about the wikification of content: "When you see the context in which something was written and you know who the author was beyond just a name, you learn so much more than when you find the same text placed in the anonymous, faux-authoritative, anti-contextual brew of the Wikipedia." This problem is exacerbated by the fact that search engines are more likely to point users to wikified versions of pages.

For Lanier this isn't just an issue of accountability and authentication, it's also one of personality. This "gives language it's full meaning. "Reading a Wikipedia entry is like reading the Bible closely. There are faint traces of the voices of various anonymous authors and editors, though it is impossible to be sure."

This resurgent belief in the near-infallible wisdom of the collective has a growing appeal to large organisations because it helps to shield individuals from having to assume personal risks and responsibilities. Yet overall it fosters "a loss of insight and subtlety, a disregard for nuances of considered opinions and an increased tendency to enshrine the official or normative beliefs of an organisation." It's also "safer to be an aggregator of the collective. You get to include all sorts of material without committing to anything. You can be superficially interesting without having to worry about the possibility of being wrong."

Lanier reckons that inappropriate uses of the collective in the corporate world demonstrate that "bad old ideas look confusingly fresh" when packaged as technology. As for blogging..."it's easy to be loved as a blogger - all you have to do is play the crowd. Real writing involves articulating a perspective that is not just reactive to yesterday's moves in a conversation."

There's no doubt that media-collectivisation is everywhere today, affecting the way we interact with the news, and the way that media products are themselves formulated. The winners of reality TV competitions may be (almost by definition) likeable, but "something is lost," Lanier argues, "when American Idol becomes a leader instead of a follower of pop music." Would the likes of Jimmy Hendrix or John Lennon have thrived on this kind of show? I myself have recently noted a rather serious decline in the quality of BBC news-programming (especially Breakfast) as a result of this phenomenon.

Lanier is concerned too that many appear to believe that whatever problems exist will be incrementally corrected as the process unfolds, responding that "sometimes loosely structured collective activities yield continuous improvements and sometimes they don't."

I'd have to admit that I was one of those individuals whose own thinking about technology was influenced in the mid-90s by the concept of organised complexity popularised by the likes of Kevin Kelly and Stuart Kauffman. Yet even then I recoiled from a certain lack of judgement and all-round over-enthusiasm for collective intelligence that was emerging in the wider techy culture at the time.

Lanier perceives a sort of race to be the "most meta" top-level aggregator in the online world, citing Kelly's enthusiasm for consensus Web filters such as popurls: "We now are reading what a collectivity algorithm derives from what other collectivity algorithms derived from what collectives chose from what a population of mostly amateur writers wrote anonymously."

There may be, as Kelly asserts, "no better way to watch the hive mind" but, claims Lanier "the hive mind is for the most part stupid and boring" so why give it our attention? He believes that we are actively making idiots of ourselves by imagining that the Net is itself an entity with something unique of its own to say: "In the last year or two the trend has been to remove the scent of people, so as to come as close as possible to simulating the appearance of content emerging out of the Web as it it were speaking to us as a supernatural oracle."

The essay concludes that calming mechanisms that worked "tolerably-well" in the pre-Internet world could now be applied to restore some order online - such as feedback loops between the individual and the collective. (Markets work this way.) However, "the hive mind is too chaotic to be fed back into itself...History has shown us again and again that a hive mind is a cruel idiot when it runs on autopilot."
Posted by Inner Diablog at 11:28 am