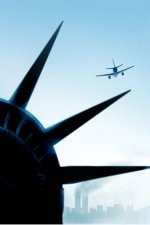 Having participated in three declared mid-air emergencies and at least two undeclared ones, this was always going to be about facing my demons. Yet for most people on this 6/6/06 evening at the West India Quay Cinemania, facing their demons involved seeing The Omen.(The 9:15 performance was a sell-out.)

I reflected that even if the Beast was born today, by time he reaches adulthood we will surely have completed the trashing of our planet without any of His help. Anyway, we already have a date when things took a definite turn for the worse − and it really wasn't long before the full consequences started to be felt.

The tension in the first hour is almost unbearable; suffocating. The nasty smell of burning normality is in the air. It's odd though that this choking tension levels off a bit (enough in any case for me to get my heart rate down) just as the hijackers pounce and the plane itself loses altitude. Perhaps it's because the director has, up to that moment, wanted us to feel like just another one of the passengers, but then changes tack, opening up a bit of distance for us to observe as these desperate un-named individuals make their bid to dodge the bullet they know is coming their way. (Though some have argued that they effectively decided to take it...for the President!)

I have to admit that I always thought they shot this flight down and have just told the story differently to perpetuate a myth of heroic but doomed resistance: another Alamo or an American Thermopylae. But before the credits roll you are told that the whilst the President had indeed authorised the military to shoot down civilian planes that weren't "squawking" to controllers, they were not informed that United 93 had been hijacked until 4 minutes after it had hit the ground in Pennsylvania. We are also told that collectively they had decided not to fire on suspect airliners for fear of false positives. Hmmm, doesn't sound much like the US military to me.

Koran-bashing terrorism is the hidden demon we all fear now, but this film is at its most effective when it's a full-on play on the fear of flying: At Newark the main cabin door to flight 93 clunks shut as ominously as any dungeon door in Hollywood history.

This is also docu-style, context-free "storytelling" at its most affecting. Although I certainly don't subscribe to the various conspiracy theories, there's still enough that we don't know about the events of 9-11 to make me wary of any attempt to fill in the blanks with cinematic narrative. And while the director has taken pains to show us the multinational make-up of the passengers before the hijacking, when the going gets tough...it's only the yanks that get going. Indeed, there's a German character that makes it clear that it would be better to wait and do nothing, which turns the final 'action' sequence into a rather unfortunate metaphor for the American experience in Iraq.

Incidentally, Lewis Alsamari, one of the actors playing a terrorist in United 93 was denied access to the US by their embassy in London, proving that he sure looked the part. He did eventually make it to the premiere.

Having been a regular cinema-goer of late, I now dread my reacquaintance with certain ads on the programme. "Peroni Nastro Azzurro: I...taly." The creative for this one obviously derived from the same sort of brief as the San Miguel Spanish passion series: epitomise the nation. Except in this case, they've managed to epitomise the thing that most repels me about Italy: infantile narcissism. Even the Jack Daniels spots leave me with warmer feelings for those banjo-twanging hayseeds in Tennessee.
Posted by Inner Diablog at 11:13 pm