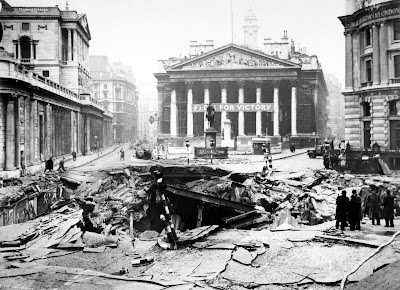 This pic of bomb damage to Bank Underground station in 1944 − the Central Line ticket office took a direct hit killing 58 people− was to have gone into tonight's programme in the section about Honneger's 3rd Symphony, but someone apparently thought it might offend the krouts, so it was pulled. The krouts in question, the Bavarian Radio Symphony Orchestra and Chorus were there to give their rendition of Beethoven's 9th symphony, which was performed earlier in the season by the BBC Symphony.

This double whammy of the one absolutely non-negotiable item on the Proms programme was arranged in compensation for the 9th-less season of 2006, a situation which resulted after a concert was cancelled at short notice last year following a small fire which set off the sprinkler system which in turn shorted some of the electrics in the Royal Albert Hall. There were no casualties and no krouts were made to feel responsible, however indirectly.

Mariss Jansons conducted, on what looked like his own personal podium from IKEA. Michael Volle (bass) was the best of the soloists.

There were several people asleep around us during the Adagio. It is possibly in anticipation of this phenomenon that Beethoven elected to kick off his Recitative with such Waaaake up you f**kers detonation.

Dead Man's Hat sent TC a text message during the concert: "I hope you switched off your mobile!" She hadn't.

This was my final Prom. It's been fun and I haven't exactly been missing out on the long, hot summer evenings.
Posted by Inner Diablog at 10:33 am

They really yanked the picture??

Interesting stuff you found out!