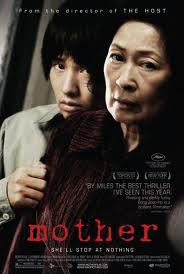 We're back in the Korean boondocks with Bong Joon-ho, where the cops are corrupt and ineffectual — and when faced with the brutal murder of a young girl, can think of nothing better to do than bring in the village idiot and get him to sign a confession under duress. (Though this involves an apple and rather less brutality than we saw in his similarly located Memories of Murder.)

The idiot in question is the loveably inept Yoon Doo-joon, and he has one of the most single-minded mothers in the country, a widowed flower-shop owner who maintains a constant vigil over her son less something terrible should happen to him. Which of course it does.

After an opening sequence in which he is run over by some rich university executives and gets involved in an abortive revenge mission at a golf club with his slightly nefarious best mate, yet more trouble pursues Yoon when he drunkenly follows a schoolgirl on his route home after falling asleep at a bar. The girl ends up dead, but we've not seen how, and when the police come for her boy, Mother snaps into action, determined to find the real killer.

What follows is part thriller, part procedural (though it's Mother not the cops doing most of the investigating), part Hitchcockian mystery and part dark exposé of teen subculture in Korea. It's also a very gripping tale of obsession.

Director Bong Joon-ho also gave us the cult movie The Host back in 2006, but this is something altogether more substantial, and it's gone straight into our top five movies of the year.