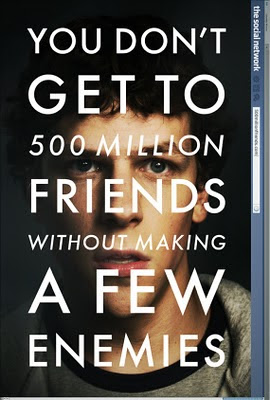 Apparently Mark Zuckerberg took his staff out en masse to see David Fincher's film about the founding of Facebook, one of whom subsequently reported back to screenwriter Aoron Sorkin that his CEO had immensely enjoyed the parts of the movie that he agreed with.

One wonders which elements of this portrayal of his early partnerships he really warmed to. The chicken joke perhaps. Did he not also, as we did, find much of this long but highy engaging movie rather depressing?

I suppose Sorkin gave Zuckerberg one significant get out of jail card in that his conceit that the whole $65bn enterprise emerged from an episode of wounded vanity (from which the implacable geek never fully recovered) can easily be dismissed as an instance of dramatic license.

And could any self-regarding scholar who didn't quite fit in at Harvard turn out as anything other than a sociopath? As a two-headed manifestation of the university's presumption Sorkin gives us the Winklevi to chuckle at, but there's no getting around the oppressive pomposity of Harvard as The Social Network presents it to us.

At Cambridge (the original, older one, I might add pompously) we had elitsim galore including exclusive dining societies and the Pickerel pub where all the secretarial college 'talent' congregated in order to snag a date with a Magdalene College toff-pot...but somehow all that didn't really dominate the culture of the institution unless you let it, and the individuals who on reflexion possibly got the most out of it, were those quiet non-partying foreign students who stayed in their rooms studying hard and maintained a generally less grasping attitude to learning, friendship and sex.

Anyway, the film is really excellent and no Facebook account should be required for enjoying it. (Sorkin apparently lacked one before taking on the project.) Jesse Eisenberg, one of Hollywood's dweeb specialists, is a revelation here for the way he handles Zuckerberg's unscripted inner demons as well as his abrasive public persona.

Everyone involved in the lawsuit showdown, especially the Winklevi and Saverin are portrayed as naive, but Zuckerberg clearly has the edge because he appears to have no higher ideals to measure himself against. Sean Parker (played by Justin Timberlake) is the real Iago-figure here and from the moment he invites the two founders out for a high swank meal you kind of know that Eduardo Saverin (played by Red Riding's Andrew Garfiled) will end up with his head beneath a metaphorical pillow.

My own experience of friendship mixed with business partnership in the heady early boom days of the mid-nineties included a cynical, late-arriving and destabilising figure along the lines of Parker, but I'm sure anyone who has ever started a company with their mates will squirm a bit at the recollection of the tensions generated by resentments over comparative contributions, external investments, shareholding dilutions etc.

The Winklevoss twins may have been slow-starters but they appear to want more than the $65m already conceded to them by Zuckerberg. With the movie bringing their horrible plight to wider public attention, they are doing the rounds of the money shows. Maybe they can sue the studio for a cut of the box-office?

I will say however that although The Social Network makes it pretty clear that Mark Zuckerberg had his own idea founded on his own inner needs and inadequacies and, as he points out in the lawyers' office, if the Winklevi had really intended to invent Facebook they would have invented Facebook, there's no denying that a first-to-market Harvard Connection might just have expanded beyond its conceptual boundaries in much the same way that Twitter later did.

That said, were Erica Albight a real-life character (?) she'd deserve at least as much of the Facebook haul as the twins. One can become an 'accidental billionaire' by creating a platform that turns out to be wildly more useful than one ever imagined, but the Winklevi had in mind something that was essentially limited to a privileged elite. They didn't want to get rich, they wanted to get laid. Zuckerberg wished to appear cool, a more open-ended ambition perhaps.

Looking forward to seeing Rooney Mara as The Girl With The Dragon Tattoo.

Posted by Inner Diablog at 2:03 pm