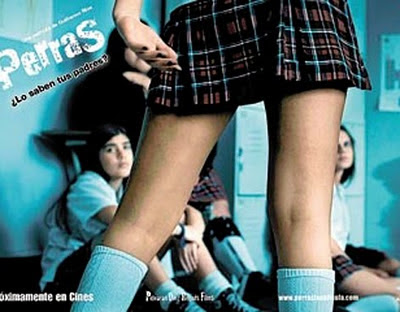 Given the way Perras had been shamelessly plugged across the more shameless comedy shows on Telehit, we had both been expecting this festival reject to be both amateurish and trashy, but it turned out to be a more substantial work than either of us had anticipated. (We might have guessed this had we then known that it began life as a work for the stage scripted by debut director Guillermo Ríos.)
Now, I've recently had cause to re-flag my insight that Mexico and Japan share an occasionally creepy pop cultural fixation with adolescent schoolgirls and the similarities and cross-currents are very much to the fore again here. It's frankly hard not to smirk at the underlying intentions of an film which wishes to document the over-sexualising of teenagers whilst seeking to titilate its audience with the very same phenomenon.
Yet in truth, these kind of fourteen-year-olds do exist in some quantity down here south of the border. Part of the power of this film to disturb was the frisson of recognition. Ríos has more on his mind than prematurely misplaced innocence however, as the core scenario sees the ten girls of his ensemble cast locked away in detention, uncertain of which of their number has done the unnamed terrible thing to cause this punishment. As the collective polemic ensues, Ríos flashes us back to prior events in school, and several of the girls recount a more personal story which touch on some of Mexico's more familiar endemic difficulties.
It's a scenario that is perhaps more theatrical than cinematic, though the best of these outgrowths is a delightful animation (another borrowed Asian technique) in which a grandmother is forced to share her home with the family of her hijo patán. Ríos also goes to town a bit with a car crash sequence. The trouble is that on many levels (character, narrative etc.) the whole rather inevitably ends up being less than the sum of its parts. And yet this very unevenness is one of the factors which contributes in the end to maintaining the disguise of the terrible event and the identity of its protagonist.
Over the years I've come to realise that one can almost immediately tell if a movie about Latin America's problems has been made by outsiders or insiders. Sin Nombre and Maria Full of Grace for example, could only have been made by non-indigenous eyes looking in. This kind of ennobled, bleeding heart take on the issues is rarely found in the region's native cinema. Perras is symptomatic of the irreverent local-eye approach we've seen over the years in movies like Matando Cabos, though it lacks the satirical bite of funny yet moving works such as La Nana, Y Tu Mamá Tambien and even El Infierno.
GRADE: B (+)

Posted by Inner Diablog at 2:23 pm