Two of the arguments most commonly deployed in defence of the late Baroness Thatcher over the past week have been 1) What a god awful mess the lefties had made of the country before she came in and sorted it all out and 2) that in spite of the short-term pain felt in certain segments of society, the imposition of liberal economic policies and values was ultimately in everyone's best interests.

That neither can be sufficient for truly getting to grips with Thatcher's legacy on a personal or political level, is evidenced by the fact that both arguments can just as easily be used as apologia for her old friend General Augusto Pinochet.

Further comparisons would of course take us into the realms of the absurdly overstretched.

Thatcher, for example, did not have the nation's leading literary light extinguished (probably), and then send a bunch of jackbooted thugs to ransack his house and burn all 8000 books in his library. Etc.

Yet we all know that even Hitler can chalk up VWs and dangerous roads in his plus column.

The fact is that strong, manipulative and ultimately abusive government tends to emerge out of periods of disfunction. Look back through the last few hundred years of history and when you find an authoritarian you can nearly always find the clusterfuck that immediately preceded them. Disarray legitimises dictatorship.

Historians are often tempted to characterise the emergent leader as a sort of aberrant opportunist (right place, right moment etc.), but perhaps there is nothing more natural than a system finding a way to unclog itself after it has become a bit bunged up under a previous configuration. 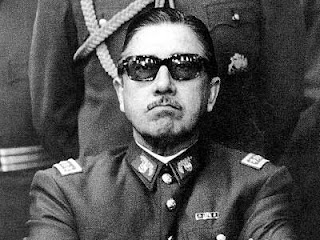 In college, I took a course where we read many of the political thinkers of Renaissance and enlightenment: Machiavelli, Rousseau, Locke, Hobbes.

At the time, I simply could not understand The Leviathan. Where was this Hobbes guy coming from? He seemed intensely pessimistic. Then, I traveled to Guatemala in 2001, when Rios Montt had come back into power in Congress.

That's when I remembered Hobbes. People will forgive a tyrant, if he (or she!) promises social stability. What is more important--freedom from repression? or the freedom to go about your daily business (even if it means that people somewhere else are being slaughtered).

I think that one of the great faults of the Americans planning the invasion of Iraq was they had no understanding of the importance of social stability. They thought they could simply kill Saddam Hussein and "liberate" Iraq and their work would be done.

Maybe if they had read The Leviathan...

It was supposed to be Margaret Thatcher's favourite book..!

It was supposed to be Margaret Thatcher's favourite book..!