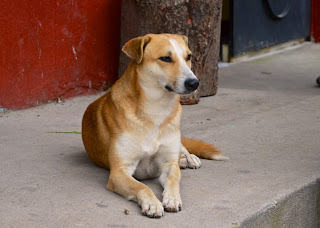 Ever since I first came to El Panorama this street has been patrolled by a solitary male street dog, who has in turn been looked after by the majority of the residents. Say hello to the current incumbent: Trompas.

He might sport a name suggestive of a less-than-sunny disposition, yet Trompas is one of the friendliest dogs I have ever come across — an expert networker adored by the people living behind the gates outside which he reclines, and both jaunty and jovial in his initial approach to any other passing pooch.

Unlike some of his predecessors Trompas was born on this street. His nominal owners were a pair of quarrelsome boozers who were looking after a bare plot. When they moved out a month ago Trompas initially went with them, but a week later reappeared, having thus clearly opted for collective over private ownership. And one shouldn't really blame him because he had always depended on the community to provide both sustenance and sentiment.

Posted by Inner Diablog at 9:40 pm

That's one excellent chucho. Does he get along with yours?

He and Jin used to play together, running along the street beside each other rubbing their necks together. Now that Trompas is fully mature he is a bit more wary of Jin, though I think this is more about his own territorial sense than any change in Jin's behaviour towards him. The two bitches do bark at him a bit, but mainly when he comes near our house and they are watching from the balcony.