I have, rather tediously, had this song in my head all week...

Whatever one might think of this 'postmodern hooligan anthem', the video is something of a classic, not least because it was conceived rather explicitly as a life-affirming response to the dour, misanthropic paseo of Bittersweet Symphony, shot on the same street and released the previous, footie-free summer of 1997. 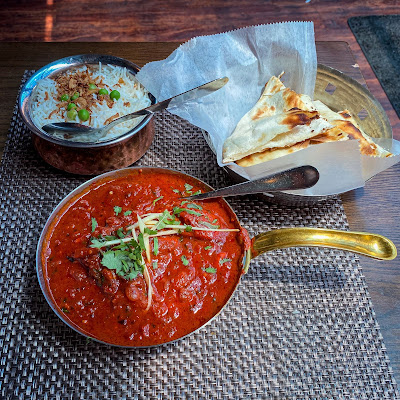 The long history of this dish, before it became a familiar test of English masculinity — typically taken under the additional duress of acute intoxication — is rather fascinating.

The Portuguese arrived in India in the sixteenth century with a package of novelties for the natives, principally Catholicism and chillies.

They found that the majority of the locals were, somewhat inconveniently, vegetarians with a particular, faith-based resistance to beef or pork, but quickly determined that this was a problem that copious quantities of both Catholicism and chillies might ultimately solve.

The Goan Inquisition was a thing, a rather unpleasant thing. By 1650 two thirds of the people under Portuguese rule were, nominally at least, practicing Christians. Many doggedly retained their traditional beliefs at home, but the spicy meat-eating habit had taken a proper hold.

The British discovered Vindaloo when they invaded Goa in 1797. It had originated as vinho e alhos on mid-Atlantic Madeira, which now has rather strong footballing associations thanks to one Cristiano Ronaldo.

An example of Arab-influenced, adobo-style cooking (adobado here), this dish was essentially pork cooked with garlic and vinegar, the latter absent in India, and so the process of naturalisation began with a replacement, bittersweet paste made from tamarind and black pepper. And some might say excessive quantities of chillies.

The British had made no similar effort to change the Indian diet, but Goan cooks, lacking any obvious inhibitions about meat and alcohol, were a significant imperial resource, so they took them with them when they departed the state in 1812.

And thus this fiery 'delicacy' — a blend of ingredients and techniques from Asia, Europe, the Middle East and the Americas — made its way across the sub-continent and then out into the curry houses of the world.

Posted by Inner Diablog at 7:05 am