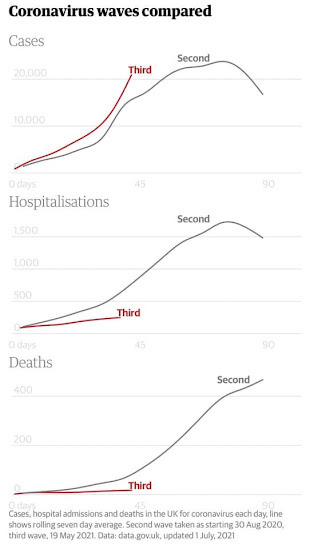 Or at least that is what this UK dataset seems to indicate. 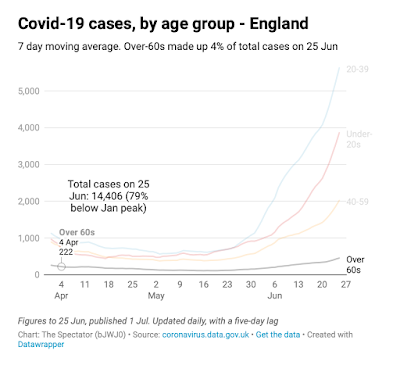 With the once-postponed Freedom Day in England approaching in just over a fortnight, the virus is moving more freely and a little less lethally within the younger demographic and overall, antibodies have reached 86% of the population, a figure that seems to be increasing by a percentage point every day or so. 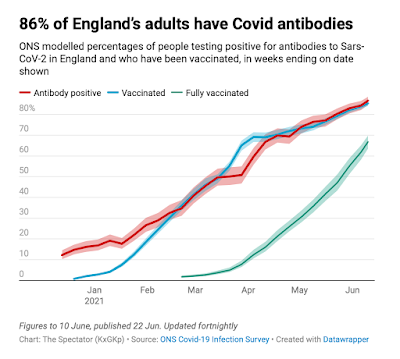 By attempting to control the covid threat by applying the same border controls that have broadly worked with other illegal biological immigrants, evil kitties and Chinese nibbles, Australia has apparently messed up, big time.

There remain some 34,000 Aussies in exile and, as of today, they have half the number of flights to try and clamber onto.

My own situation is not so different. Although fully-vaccinated, I cannot yet return to the UK without having to do time at one of those mind-numbingly bland quarantine hotels near the airport, at my own expense. This is because Boris and Biden have failed to open up a travel corridor and because Guatemala is a long way from being on anybody's green list.

Case numbers have increased here this week at a near exponential level. 909 new infections on Wednesday, 2855 on Thursday...

Antigua Guatemala, lately a kind of miraculous amber island in the midst of a sea of red, can anticipate more restricted times ahead. Two absolutely vital marquee events, the illumination of the stadium and the Miss Antigua pageant have already had to be cancelled.

There's a cliff edge in sight. Any sort of cross border travel may soon be problematic again, though the Mexicans have been pelaverguistas up to now and yesterday they even vaccinated Neto Bran.

This past fortnight we have witnessed some slightly chaotic attempts to vaccinate around 600 a day at Cesar Brañas. Some days have been more oversubscribed than others, possibly due to the 'on the buses' phenomenon familiar from election time. Residency does not appear to be a strict requirement.

Right now any vaccine is better than no vaccine, but I have some serious reservations about Sputnik V in the Central American context, not least because the Russians appear to some extent to have pocketed the dosh and done a runner.

Firstly, Sputnik V is not widely approved in the developed world, which implies that its use for vaccine passport purposes in 2022 and thereafter will be somewhat hamstrung. (It is also being reported that the EU's scheme will not accept UK Astra Zeneca vaccinations based on doses produced in India.)

Secondly, my understanding is that the subsequent dose is not identical to the first, so one has to trust to some extent in the logistical competence of the authorities here to ensure that anybody who has had part 1 now, duly gets the remainder of the concoction they will need in three months' time. And those three months could anyway be critical.

We have already seen reports of people from the capital showing up in Antigua seeking what would be a second first shot.

Opportunism of this sort is not uniquely Guatemalan. In the UK many of the young ones are seeking a second Astra Zeneca jab ahead of schedule, largely in order to be able to have a summer holiday in 2021. Guardians of fairness like the Guardian itself may object in principle, but there is something to be said for any incentive that encourages the more youthful age-groups to get themselves covered.

Given that the authorities in Chiapas seem happy to stick a syringe full of Astra Zeneca into willing Chapin arms*, this does seem like the better option for more adventurous locals.

Especially as 6000 doses have been administered here in Antigua now and until fresh supplies arrive, no more will be.

I would imagine that your easiest and cheapest route back to the U.K. would be via Cancun? That Mexico is currently am Amber rated country is bizarre, given how they’ve never run much of a testing system and have consistently hidden the true scale of virus fatalities.

The trouble is that BA has dropped that route. I guess CDMX could work. It is bizarre that Mexico could be amber. It probably won't last. I have friends that have made it back via other third party countries, but that adds to the duration of the journey. There's an opportunity here for some sort of route-planning app, constantly updated with new data on the status of each country relative to all the others.