There's a kernel of an interesting idea here, but by the end of this Canadian movie I had kind of lost track of what that might be. 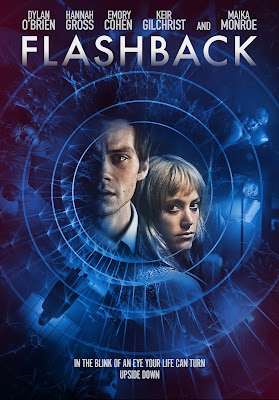 The title* suggests a linearity which is actually absent, for the protagonist Fred has seemingly detached himself from the A to B logic of human existence, itself blamed on the interventions of an alien force which is never elaborated upon.

Other intriguing conceits are suggested and then vanish in the mist. What if we could 'explore' the alternative pathways of a multiversal existence that normal, un-jumbled time denies to our consciousness.

At high school Fred had a kind of manic pixie dream girl-chum called Cindy who does seem to be up that lark, thanks in part to a street drug called 'Merc'. Fred himself appears to be 'flashing' in and out in a less purposeful manner.

The blurring of realities, past and present, provides a hint of something profound behind all the opacity, which there probably isn't, but the overall effect is surprisingly un-disappointing as writer-director Christopher MacBride has perhaps knowingly served up something which his audience can put to their own subjective contemplative uses.

Present too is the existential dread of having hidden horrors in one's past trajectory which reveal themselves in the form of disturbing visions that cannot easily be distinguished from revived memories of past nightmares.

* In some markets the film goes by the name of The Education Of Frederick Fitzell.

Posted by Inner Diablog at 1:15 am