Not a bad movie per se — this third outing for the Warrens definitely looks good — but one that takes itself way too seriously. To the extent that I was almost hoping for a blooper reel over the end credits.

But instead we got all that based on the shockingly (obviously not) true story stuff, which compounded the devout goofiness which had just wrapped up. 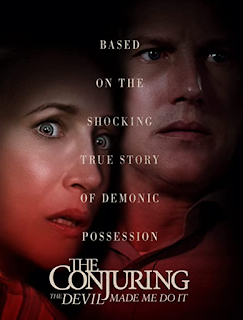 This movie from Michael Chaves (The Curse of La Llorona) kicks off with a fun set-piece exorcism sequence, which puts one in the mood, yet unless one is seriously Catholic and/or actually believes in demons, then what follows barely produces a single scary moment.

And the demon itself struggles for agency.

Posted by Inner Diablog at 6:38 pm