It looks like Mexico is going full guinea pig when it comes to the roll-out of covid vaccines.

These the latest stats on its programme — from yesterday — which show enough doses in situ for roughly a fifth of the relevant part of the population. 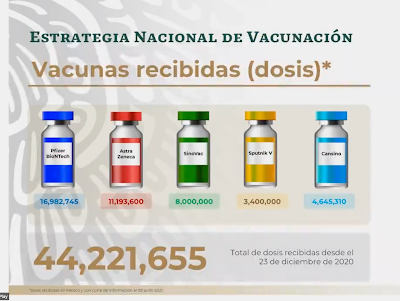 The variability that ultimately emerges may not just be a matter of efficacy — especially against the Delta variant, now accounting for 91% of new cases in the UK — but also of international admittance.

We can see some early signs of this as the UEFA European Football Championship opens tomorrow with fans at Wembley being able to skip the testing requirement if they can show proof of having had both jabs at least 14 days prior to the match. (It will be interesting to note the age profile of the crowd for England's opener against Croatia.)

The geographically-dispersed format of the competition was laid down before the pandemic. The result is that a number of teams (Hungary in particular, with full stadiums, though fortunately not the Frogs) are going to have a measure of home advantage in the group stages.

Group B for example, features both Denmark and Russia with matches in Copenhagen and St Petersburg.

Danes will be welcome at the latter…but, Guatemalans, Argentinians etc. please note: Sputnik V has not yet been approved by the EU — if it ever will be — which means that Russian fans are not going to be welcomed in the Danish capital.

This is a fairly inauspicious sign that the protocols being given a run out this month will not feature an entirely level playing field as we press ahead into the new era of vaccine passports.

Posted by Inner Diablog at 3:20 pm