Can we be clear on this — if Russian fans boo taking the knee, chances are it's not a principled anti-Marxist stance. 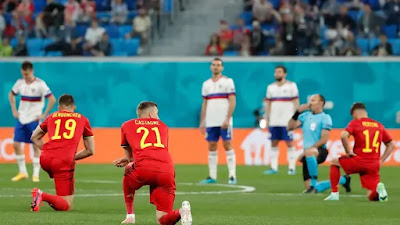 The gesture does not inherently belong to BLM, inevitably tied to all their dodgy, 'foreign' politics. It belongs, in the main, to Colin Kaepernick.

So yes, it's an American cultural export on some levels, and like hamburgers in the 70s, it is probably an ultimately unavoidable one. But it was conceived as 'respectful', like a flag at half mast, and so itself is surely deserving of some basic respect.

Kaepernick was adding a footnote to his own nation's patriotism, rather like a caveat relating to equality and the founding ideals.

Try arguing that this is not at all relevant to England without sounding like a twat.

Posted by Inner Diablog at 7:49 pm