The Revenge of Power by Moisés Naím

Revenge is a dish best served...with tacos and papas fritas. 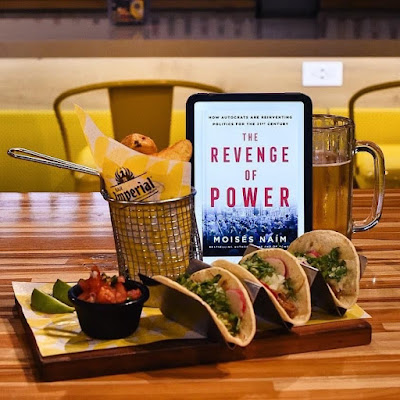 While many of us have become all too aware of the malignant and dissembling form of political power which Moisés Naím details here, he suggests that the need to comprehend all of its strands is urgent if we are to avoid further erosion of the fundamentals of free societies.

“What we’re seeing today is a revanchist variant that mimics democracy while undermining it, scorning all limits.” The agents of this new autocracy are geographically and ideologically diverse, yet he sees uncanny parallels in the playbooks of politicians like Bolsonaro and López Obrador, Bukele and Trump.

He refers to them collectively as ‘3P’ stealthocrats, leaders who “reach power through a reasonably democratic election and then set out to dismantle the checks on executive power through populism, polarization, and post-truth.”

The 3Ps are constantly seeking often furtive new mechanics for breaking free of constitutional and institutional restraints, for establishing legitimacy in an environment where unconstrained power is taboo. This is typically done “by faking fealty to the liberal consensus, all the while eating away at it from the inside,” an action he compares to 🐝 larvae consuming their arachnid hosts from within.

The author concludes: A limited, contingent form of power will not be enough for practitioners who “have learned how to leverage trends like migration, the economic insecurity of the middle class, identity politics, the fears globalization gives rise to, the power of social media, and the advent of artificial intelligence. In all sorts of geographies and under all sorts of circumstances, they’ve shown they want power with no strings attached, and they want it for keeps.”