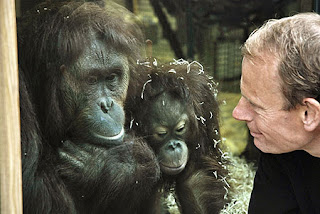 Andrew Marr was recently described by Ed West in Spiked! as a "libertine". Unless I'm missing something, I think he meant libertarian!

Anyway, this three-parter was the take on the legacy of On the Origin of Species from the walking embodiment of the BBC's cultural-liberal bias, and in my view it was the best of the multiplicity of programmes the Beeb has put out to mark the anniversary of Darwin's birth 150 years ago. (Though I did really enjoy Armand Marie Leroi's film on BBC4 too.)

I've sent off for my free tree of life poster.

Marr lifted the title for his series from Dan Dennett's more intellectual (and more polemical) book of the same name. Whilst he does seem to broadly agree with Dennett's assertion that...

"If I were to give an award for the single best idea anyone has ever had, I'd give it to Darwin, ahead of Newton and Einstein and everyone else."

...he apparently reckons that the 'dangerousness' of Darwin's idea stems not from its inevitable tendency to redefine what we mean by the meaning of life, but rather the way it leant itself to combinations of bad science and bad politics during the twentieth century, and in the manner that it clearly points to the very alarming ecological circumstances of the present time.

It was indeed unnerving to think that the Nazis had founded heir 'final solution' on the bizarre Darwinian logic that any Jews that had survived the work camps would be stronger and more ready to 'rebound' after the war unless drastic measures were taken.

I liked the way Marr dallied on lesser-known aspects of the subject, such as Darwin's cheerless experience of the native 'Fuegans' of Chile on his Beagle voyage, and Dr Vernon Kellogg's run in with the beserk darwinistic attitudes of the WWI German high command.

Marr had himself DNA tested only to discover that he has the ancestral (and more African) variant of the gene currently being associated with higher intelligence .

The series had its silly moments, such as the extended footage of Marr circling around the Bosphorus in a speed boat (why exactly?) and his attempts to pass off the botanical garden in St Lucia as a bona fide rain forest. For these jungle scenes he had however carelessly neglected to change out of the kind of clothes one might wear to lunch at a Notting Hill organic diner.
Posted by Inner Diablog at 9:00 pm