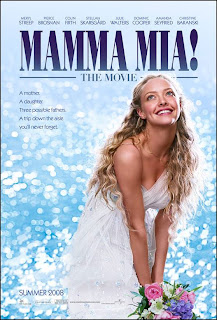 Levels of kitsch and all round vacuum-headedness were predictably choking. But the songs themselves and maybe also Meryl Streep's performance, prevented me from going under completely.

I think it was probably healthier to have watched this sitting next to someone who hates Abba with a passion (V). I'm not sure that my mental health would have survived being in a cinema surrounded by the singalong types.

Fresh in my mind too was an essay by Umberto Eco on Casablanca and what makes a cult movie:

"The work must be loved, obviously, but this is not enough. It must provide a completely furnished world so that it's fans can quote characters and episodes as if they were the fans sectarian private world, a world about which one can make up quizzes and play trivia games so that the adepts of the sect can recognise each other through a shared experience."

Casablanca has archetypal appeal, he argues, but acquired it almost by accident: Michael Curtiz's production was to some extent improvised from the start, packed with what Eco calls 'intertextual frames' (deja-vu inducing archetypes or universals) because when you have no idea where your story is heading you tend to fill it with stereotypes that you know have worked elsewhere:

"I think that in order to transform a work into a cult object one must be able to break, dislocate, unhinge it so that one can remember only parts of it, irrespective of their original relationship with the whole. A movie..must be already ramshackle, rickety, unhinged in itself. A perfect movie..remains in our head as a whole, in the form of a central idea or emotion; only an unhinged movie survives as a disconnected series of images, of peaks, of visual icebergs. It should also display not one central idea but many. It should not reveal a coherent philosophy of composition. It must live on because of its glorious ricketiness."

So how does this theory hold up with Mamma Mia!? It certainly 'lacks a coherent philosophy of composition' in as much as the plot is an excuse to string together a stack of Abba hits. (Apparently the story idea for both musical and movie adaptation was snatched from a 1968 screenplay co-written by my father's old partner Denis Norden: Buona Sera Mrs Campbell.)

I'm not sure it can support a pub quiz though. It's main claim to 'quotability' is the fact it is itself laying on the nostalgia by quoting 70s pop culture in a context which might be described as a modern female slacker fantasy.

Eco also suggests that the deployment of archetypes is a bit of minefield.

"When only a few of these formulas are used, the result is simply kitsch [Pretty much was happened here...] But when the repertoire of stock formulas is used wholesale, then the result is architecture like Gaudi's Sagrada Familia: the same vertigo, the same stroke of genius." [But what of chirmolazos like The Unborn?]

Comparing Casablanca to the Indiana Jones movies, he admits that the archetypes that are 'semiotically interesting' are the ones that sneek in almost unconsciously.

The setting of Mamma Mia, even the structure of its tatty storyline, actually took me back to Shakespearean archetypes such as Kenneth Brannagh's Much Ado About Nothing. Less high-brow instants of deja-vu were also delivered by recollections of Shirley Valentine (another female slacker fantasy located on the Aegean) and Captain Correlli's Mandolin...which could have done with a chorus of singing and dancing Greek peasants itself. As for the overall gay-ness of the experience one possibly has to cast one's mind back to Cliff Richard's 60s oeuvre.

Grade: I really have no idea. Mostly C--- but with occasional B+ sparks of affirmation.
Posted by Inner Diablog at 7:39 pm