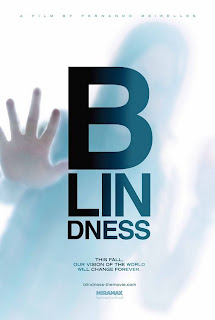 In as much that one's first thought on going blind rather unexpectedly would no doubt be 'WTF?', Fernando Meirelles's film is an authentic representation of this experience.

Saramago's novel was certainly heavy going in places, but never as chillingly dull as parts of this adaptation. I think even I could have done a better job of adapting the novel for the screen, especially in terms of the dialogue.

In its creative greed the international movie business has appropriated landmark novel after landmark novel without any regard for the fact that the best modern authors remain ardently uncinematic in their storytelling tenor. And if you take away the narrative voice from a Saramago allegory, you take away its humanity.

I'm convinced there's a dingbat out there somewhere who's going to try to bring Cien Años de Soledad to the silver screen in my lifetime. (Or is anyone yet up for The Brief Wondrous Life of Oscar Wao?)

In Saramago's stories something tends to occur in a small country (which may or may not be Portugal) which temporarily changes the fundamental rules of the game: people stop seeing, people stop voting, people stop dying. In As Intermitências da Morte the way to carry on dying is to head for the border. These are not global apocalypses; yet this is exactly what the 'white plague' has become in Blindness, which Meirelles shot in Canada and Brazil with a quaintly international cast. (Alice Braga is in the mix, last seen in the equally post-cataclysmic I am Legend...BSing Will Smith about God as he in turn BS'd her about Bob Marley.)

And when someone says 'We're starving to death here' they need to look a bit more like Christian Bale in El Maquinista. A few turds in the corridor do not an authentic concentration camp make.

There are certainly parts of this film which are striking, beautiful even. I caught blurred glimpses of what had moved me in the book. But you can also sense the director flailing around for arresting visual metaphors, as if to compensate for the poetic truncations implicit in Don McKellar's screenplay.

It's odd how talented film-makers such as Meirelles get themselves roped into these projects. The whole thing smacks of a Hollywood remake which has bypassed the unnecessary intermediate stage of the subtitled foreign flick.

Posted by Inner Diablog at 3:23 pm