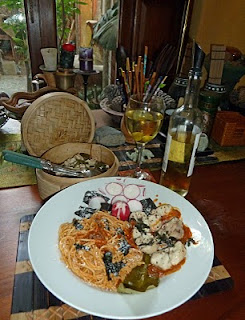 Regular visitors will know that Monday is usually shark day in our household. It comes to us via one of those itinerant indigenes from Quiche with only the most basic grasp of Spanish.

I tried to make some vaguely British conversation about the chilly state of the morning weather with 'Pedro' today, and he nodded in nervous near-comprehension and muttered something like "si, much friiie".

Today we steamed the fish with lime leaves, yaki nori and herbs and then served it with chopped radishes and spaghetti doused in a mee goreng sauce, which I picked up in a packet in Singapore earlier in the year.

We've been eating a few too many radishes over the past few days in truth. And the sauce was just a bit too oily — yet should be easy enough to reproduce according to our own taste, galangals aside, as it is based on tomato, tamarind and chile.

Looking around for recipes online there really seems to be no definitive way to prepare this spicy noodle dish, common to both Malysia and Indonesia and quite similar to Japanese yakisoba.

At the end of last week we discovered an underexploited local plantation of lemongrass, which is bound to come in useful over the course of next year.

Posted by Inner Diablog at 1:02 am