Let's call the whole thing off... 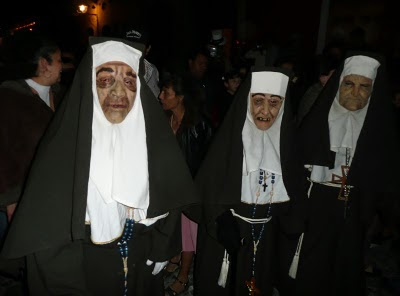 I might have inadvertently given the impression the other day that Chapines care little for matters of health and safety, so it's only fair that I should set this right by bringing it to your attention that Antigua's traditional (well, since 1999) Festival of the Calle del Arco on New Year's Eve has been called off today by its own organising committee — whose members have reportedly been collectively suffering sleepless nights over the idea that the ever growing number of participants in recent years points to the near inevitability of future fatal accidents.

During the other 364 days of the year the public issue which most seems to engage — literally keep awake — this august body of neighbours, is their own peace and quiet, but we'll just have to accept their word that they really are genuinely worried about the possibility of a Duisberg or Phnom Penh-style crush occurring on their turf, and not just narked off that their quaint little spectacle of frolicking inditos has been steadily overrun by rowdy elements from across the region and beyond.

By the way, what were those evangelical Jeremy Hunts doing at La Concepción tonight for the Burning of the Devil? Doesn't this tradition mark the commencement of the Feast of the Virgin of the Immaculate Conception...an unequivocally Catholic tradition? Forgive us our trespasses indeed.
Posted by Inner Diablog at 4:27 am

Kudos for the Jeremy....

So what will happen on the 31st? Just smaller private parties? Won't a zillion people show up anyway? No fireworks? No showering of cider?? Glad we went last year! Despite all the people it was amazingly orderly, I thought, and the streets were clean by 7:00 a.m.

It was the first year that we felt it had become hard to conduct an orderly paseo from one end of the Calle to the other and the events were being swamped a bit. I think the idea is to run these (even the toritos) from 2pm to 8pm instead.

BTW the Burning of the Devil last night was also more packed than I had even seen it, and that's with an alternative attraction in Ciudad Vieja.