Awake: 'Turtles all the way down' 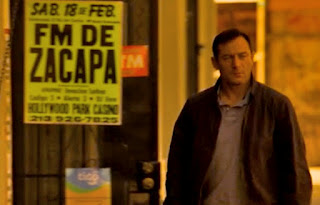 And so Awake has concluded...for good. Yet another attempt to blend science fiction with mainstream TV sensibilities has ended up in a first season cancellation. You might accuse the networks of lacking the courage of their convictions, but the real problem is that even the screenwriters appear to have pulled up short time and time again.

I liked this show, and will miss it. Yet its fatal flaws were altogether obvious.

The narrative consisted of four, ultimately poorly-integrated elements: police procedural, soap opera, conspiracy and high concept metaphysical mystery. It was clear from the start that the crime-writing component wasn't up to even CSI standards, and it soon became apparent that the soap opera was rather dreary and that the underlying inter-cop conspiracy was deadeningly ordinary.

So that left the metaphysical (or perhaps merely medical) mystery, discomfitingly detached from the other elements in terms of its rationale. If the duality within Britten's consciousness had no obvious relationship to his situation, it never developed into anything more than a script-writer's thought experiment. Yes, the switches between yellowy and bluey realities were used to better effect, tension-wise, in the latter episodes, but there should have been a constant flow of clues/teasers as to how and why this bifurcation might originally have occurred.

One also wanted to have a more obvious and consistent relationship between these two worlds and the information that passed between them, especially as it related to the police procedural narrative, as this could thus have been a good deal more gripping. In the end we were treated to a kind of resolution, which was gratifying, but felt under the circumstances of summary cancellation, too obviously bolted on to be fully satisfying.

Jason Isaacs gave the show a very strong and appealing central character. But deep down he was as one-dimensional as the others: it was the performance, and the actor's own charisma, not the writing, that made him interesting. Traditionally in this genre the detective must have some obvious nagging flaws, such as an old drinking problem or an inability to keep their private life in good working order like Sarah Lund in Forbrydelsen (The Killing). Other than the obvious psychological issues and family loss, Britten was squeaky clean with a near perfect home life.

Awake could have made better use of cliffhangers as well. Well-crafted episode conclusions were the main reason that I stuck it through all twenty episodes of the aforementioned Danish crime thriller.

Meanwhile, Season Two of Game of Thrones continues to be a right old despelote as far as its expanding cluster of storylines go. This dogged attempt to run all the different character-driven narratives concurrently is a major FAIL. They ought to have learned some lessons from series such as Lost, where a degree of rotation was successfully enforced.