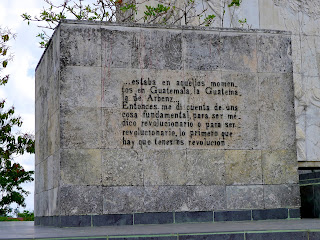 So it was Guatemala that sorted out Ernesto 'Che' Guevara's social conscience once and for all. Before that he was penning stuff that would not be destined to be immortalised here at his lasting monument in Santa Clara:

"Easter Island! There to have a white boyfriend is an honour for the female...There - what a wish - the women do all the work. One eats, sleeps, and keeps them content...what would it matter to stay a year there, who cares about work, studies, family, etc.


"The black is indolent and fanciful, he spends his money on frivolity and drink; the European comes from a tradition of working and saving which follows him to this corner of America and drives him to get ahead, even independently of his own individual aspirations.


"The blacks, those magnificent examples of the African race who have conserved their racial purity by a lack of affinity with washing..."

El Che wasn't the sort of historical personage one habitually associates with political incorrectness; yet as Christine Lagarde can surely attest, we are all prone to say things that we may later come to regret...