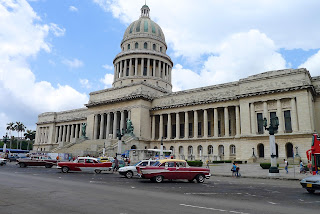 I recently compiled a list of what I believe are the world's top 20 major urban destinations. Like all such things it is tinged with partiality, but the first fifteen or so entries more or less pick themselves. There are now just two names on my list which may leave me with a nagging sense of regret in my latter years, should they still remain unvisited: Istanbul and Rio de Janeiro.

I've done well in fact when it comes to the great cities on this globe, fortunately perhaps, because I have the dark premonition that one or more of them will be properly destroyed, and thereby rendered unvisitable, before my traveling days are done.

Perhaps no-one should be surprised that La Habana makes it into my top twenty; indeed it might even scrape into the top ten. There are other cities on the island which do Cuba-ness just as well, if not better, but it is that city's overwhelming air of Havana-ness which sets it apart, and led to an almost inevitable sense of disappointment when I showed up in Santiago de Cuba, extrañando the sudden gust of sui generis qualities that sweeps up the visitor to the Cuban capital.