Some of the British critics turned their noses up at this one. Dr K didn't even see it, while Robbie Collin of the Telegraph thought the very idea of Superbad for the pre-teens was super bad.

Yet the essence of his critique - that the twelve-year-olds speak as if they have been scripted by adults - is little more than a factual statement about the way this functions as comedy. The gag even features on the poster... 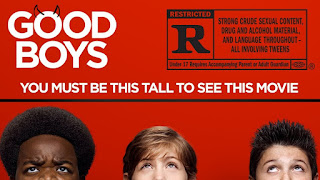 If it hadn't stepped so defly beyond the confines of strict realism, it wouldn't have worked. The Bean Bag Boys are glove puppets, and knowingly so.

Overall, we thought it was both funny and delightful. It seems like a while since a decent Hollywood comedy came along or indeed a movie about student life in the US that feels fresh.

I enjoyed all the stuff about first kissing parties, spinning bottles etc. It has to be said that the loss of innocence came a little later in my day.