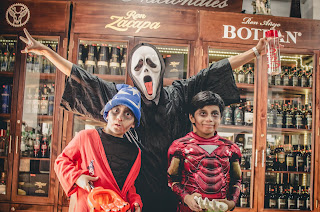 Tonight marks the thirtieth anniversary of my first Halloween in Antigua.

Things were a bit more low-key in 1989. Hardly any large scale trick or treating for sure.

It was a bit of a novelty for me, as even in the late eighties Halloween was still not much of a thing back in Britain.

There was one big party in town, mostly locals, which we attended albeit briefly. The venue was a ruin. I can't remember exactly which one, but I have a feeling it was Santa Clara.