The Parade by Dave Eggers

Two men — un-named contractors of a developed world corporation — have been tasked with collaborating to lay down a tarmac road in time for a celebratory parade in an un-named war torn country, which appears to be on the brink of peace. 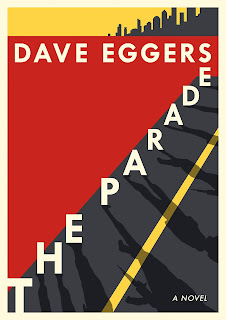 The story is told in fable form, the road a MacGuffin of sorts and its makers both avatars of regulatory rich world interactions with the poor world, albeit conflicting in their fundamental approach to both the job and its environment.

I thought at the start that Eggers might have been trying to do something that has occasionally appealed to me as a project — a science fiction novel set in the near future of a developing nation where the impact of wild new tech is felt weakly and obliquely to its native, unabashedly modern implementation.

But it's not entirely clear where we are in relation to our own world. The Rs-90 machine 'Four' and 'Nine' use to link up the north and south of this country is indeed futuristic, yet the locals they come across seem astounded by a device upon which they can view a photograph immediately after it is taken. Do such places still exist?

I enjoyed this novel, as I have others by the same author, but it didn't shake me up in any meaningful way and I was left feeling that perhaps it ought to have. And the tension was strangely muted throughout, which made the severe 'punchline' feel just a tad unwarranted.

Posted by Inner Diablog at 4:13 am