Well, this was about the most existentially disturbing thing I've sat through in a long time. 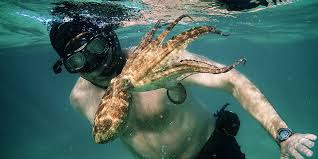 I guess the question must be: how intentional was this?
And then: Did it win the Oscar last Sunday for its hidden payload of metaphysical angst?
Oh, and finally: What happens to male octopuses?
The title announces the didactic mood. Perhaps it ought to have been Your Octopus Teacher.
There's a story here which acts as a payload for the environmental message. We meet Craig, a white South African in mid-life crisis, which is partly resolved via a partly-requited love affair with a female octopus living in a kelp forest den just beyond the southern tip of Africa.
Craig's narrative is deeply moving even as it is superficially rather depthless, and occasionally drifts towards the ridiculous. It’s relationship to the underwater footage at times feels staged.

The message on the surface is that contact with this sort of playful, yet short-lived alien consciousness distinguished by its tactile curiosity can make the younger generation recognise that they are a part of nature even if at the same time it whispers to old timers that they might wonder why they still want to be.
Human consciousness is like a containment system (or user interface) for our vast nervous system. Are octopuses almost like autistic savants with a far less pinpoint awareness than your average human? I need to know more.

I was left with an uneasy sensation for days after viewing this. It's now passing, yet I have resolved to read this now... 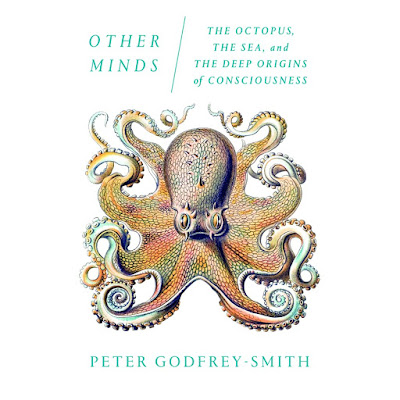 Posted by Inner Diablog at 6:43 pm