The multiverse a big thing that we extrapolate from observations of the weird behaviours of the smallest things — a single photon of light passing through two slits at the same time.

How big, how complex, how messy, (how much of a threat to narrative) it becomes is in a sense up to us. You can, for example presume that every photon passes through every possible slit, and who am I to disagree, but anyway, I am still inclined to.

For me the big things that make up material reality are a the result of an interaction between the potential and the actual, always a process, rather like life. Possibilities take shape, while others are left behind. So even when the possibilities are close to infinite as a starting condition, actualities may form into a far more limited set of clusters. 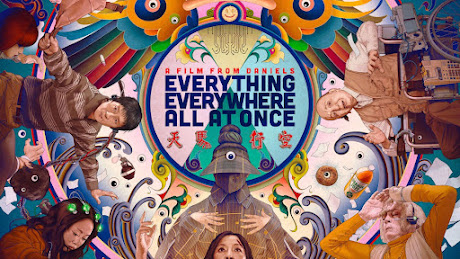 Anyway, part of the trouble with this film is that it refuses to make up its mind which version of the theoretical multiverse lies behind the drama. The characters even squabble about whether they are going too far or not far enough, and that is precisely the problem. 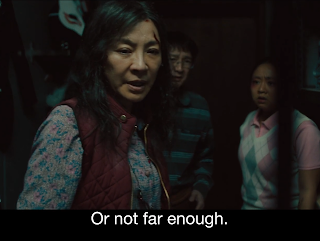 There are some good visual gags — such as a outlier universe where everyone has hotdogs for hands — but these only drag the scenario towards the messy side of the complexity spectrum as they undermine any attempt the viewer might be making to ground themselves in the underlying concepts.

This may of course be deliberate: a ploy to distract us with an impressive swirl, because hardly anyone has ever made a movie about the multiverse (or indeed time travel) that isn't to some extent weighed down by its contradictions. Whereas in EEAAT, there's not much to have an argument with.

It occurred to me that 'Daniels' may be aiming for the effect of one of those dreams that seem awfully profound in real time and then kind of evaporate from one's mental workspace the moment they conclude.

Overall, there is simply too much going on for the viewer to really care about any of the characters. And there were moments when it felt a bit of a chore to digest.

The antagonist character voices a commonly-perceived problem with reality as explained by physicists: "Everything is just a random rearrangement of particles vibrating in a random superimposition". The screenplay seems to want to push back against this apparent hazard — that the big picture is inherently, depressingly, infinitely dull  — but it doesn't have much to offer as an alternative other than "be nice".

My attention was first drawn to the real possibility of mutiple universes by OU's famed theoretician David Deutsch. He still appears to harbour a preference for a deeper, more intellectual form of optimism in the face of it.

Our every action need not get washed away by a pitiless ocean consisting of infinite other possibilities, because our very existence as a sentient form of matter is perhaps atypical, at least from the perspective of the possible, and thus the multiverse may be set up to foster the exceptional rather than the mediocre after all.

This movie does seem to want to lead us to the place that matters beyond "all this noise", but we never really get anywhere near it.

The soundtrack is superb and some of the memorable comic turns had me wondering what happened to the directorial career of Stephen Chow. Turns out that Kung Fu Hustle 2 is in the pipeline and he has agreed with Netflix to produce an animated version of The Monkey King.

I think I will skip Dr Strange's outing into Marvel's extended multiverse.

Posted by Inner Diablog at 2:41 am

a single photon of light passing through two slits at the same time.
I suspect the real question here is : there seems to be a mechanism in our world that operates at a speed faster than light speed. Much faster...