I've been writing about the potential for unusually disruptive effects of the pandemic on our local economy. This is an example that presented itself to me this morning. 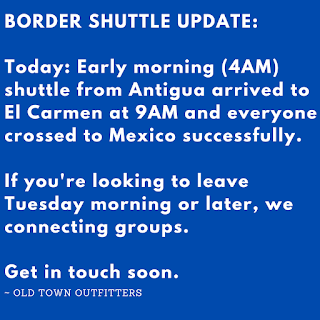 A gringo refugee export service, run by a clothing company, not one of the (presumably) idle travel agencies.

I wonder why they have chosen the El Carmen exit. If I were keen to leave right now I'd prefer to enter Chiapas via La Mesilla for the simple reason that Tuxtla has additional flight options and is closer to bigger cities like Mérida.

Hats off to Jake of Pappy's BBQ. In the space of a week he has gutsily overhauled his business model to confront the new situation.

If he'd been pitching it in the Dragons' Den last week and then come back seven days later all the basics like costs, revenue, prices and profit would have been updated.

In the same period some of his competitors haven't even bothered to refresh their menus.

There's much more to this than new packaging. There's clearly some novel accounting, marketing and thinking behind it, which could save the firm from the need to join all the lemmings currently filling the streets with disorientated motos.

And it has a multi-faceted potential for imperishability lacking in some of those short-termist, headless chicken deliveries.

No guarantee of success and all sorts of pandemic-driven risk factors remain, but he’s given himself as good a shot as anyone. 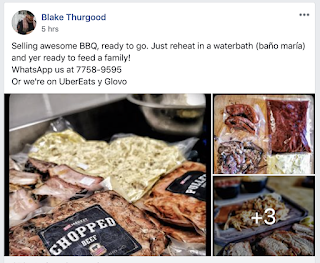 This Uber Eats rider appeared to have collected an old crone and was quite widely spotted (and commented upon) around the area. 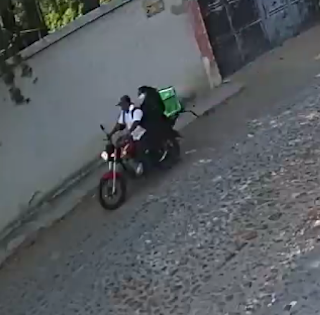 Posted by Inner Diablog at 7:45 pm